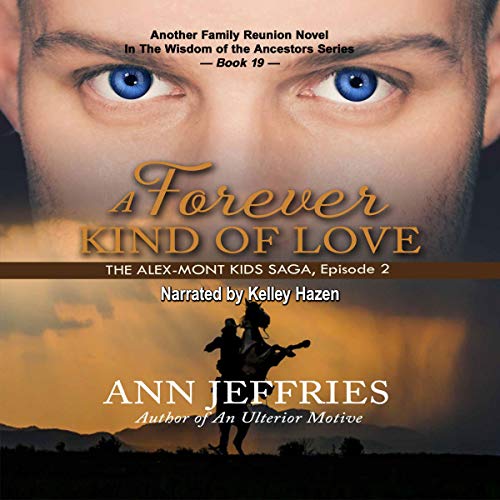 A Forever Kind of Love

Brian Montgomery loved the life he lived as the son of Chuck and Vivian Alexander Montgomery. As the general manager of his family’s Alex-Mont Ranches in Monroe County, Pennsylvania, Mitchell County, Maryland, and Summer County, South Carolina, his days were what he wanted them to be. He wished for nothing and, although he didn’t know anything about his biological history, he relished the family who adopted him. He and his 30-plus siblings were a tightly-knit “posse”, as his dad called them. Most of them were also adopted as health-challenged infants or toddlers, as was he. Nevertheless, they all received top-of-the-line educations at some of the most prestigious universities in the country. No, he had everything he wanted - the love of family and friends. Women weren’t kicking him out of their beds, so he was content.

KiLe Hakamora couldn’t believe that her guy friend of more than two years was in the shadows of the Montgomery Mansion with his hand under the minuscule skirt of the bottle-blond with the big boobs. Unable to watch the spectacle of them tickling each other’s tonsils, she ran away. Blindly, she ran into a pretty log cabin and came face to face with the unbelievably handsome and naked Brian Montgomery fresh from his shower. Suddenly, her guy friend’s infidelity went right out of her head with the sight of this gift to womankind. It was a typical late fall day when KiLe crashed into his life and changed it forever.

She made an impression from the beginning. All was going well, until someone slaughtered his livestock and it was revealed that KiLe was the granddaughter of Japanese royalty and a Yakuza criminal. Brian’s life took on other challenges when a teen accused him of fathering her child, and someone wanted to do a hostile takeover of the Alex-Mont company. Brian and KiLe had to trust each other to weather the storms testing their forever kind of love.

What listeners say about A Forever Kind of Love

Chuck and Vivian Alexander Montgomery have multi-cultural family most adopted. This book is mostly about their son Brian and KiLe as they develop their friendship then love. There are too many family members to mention their names. It was a fun family affair listen with good narration. . I was given this free review copy audiobook at my request and have voluntarily left this review. THANK YOU

I was voluntarily provided this free review copy audiobook by the narrator and found it fun. The second generation is having as much fun finding love and their place in the world as their parents did. Right from his shower Brian Montgomery walks into his kitchen to find a woman curled up sitting on his floor, and changing his life forever. All these books are based on family and friends and it can be uplifting listening at times and at others you just find yourself laughing out loud and you have to back it up because you missed something. The interesting and intriguing characters keep you listening, wondering what unexpected twist will happen next. Once you're finished you'll be looking for more of this series to listen to.

Ann Jeffries has a panache for writing epic family drama stories. A Forever Kind of Love pulled me in immediately. I loved the cameo appearances of characters from other books by this author. There is so much going on in this story and many dynamics. Kelley Hazen was incredible bringing the characters to life. I could hear exactly who was speaking. Her talents are remarkable for performing various ages and ethnicities . This book was a delightful listen and did not bias my opinion of it receiving a review copy.

A Forever Kind of Love: The Alex-Mont Kids Saga #2 was a good read by Ann Jeffries. Brian Montgomery has lived a good life as the son of Chuck and Vivian Alexander Montgomery. He's the general manager of his family's Alex-Mont Ranches in Pennsylvania, Maryland, and South Carolina. He has thirty-plus siblings, most of which were adopted as health-challenged infants or toddlers. KiLe Hakamora finds the man she's been with for two years with his hand under a blonde's skirt. She blindly ran from that scene into a log cabin, and came face to face with a naked Brian. KiLe crashed into his life and changed it forever. I enjoyed reading Brian and KiLe's story and can't wait to read more by the author.