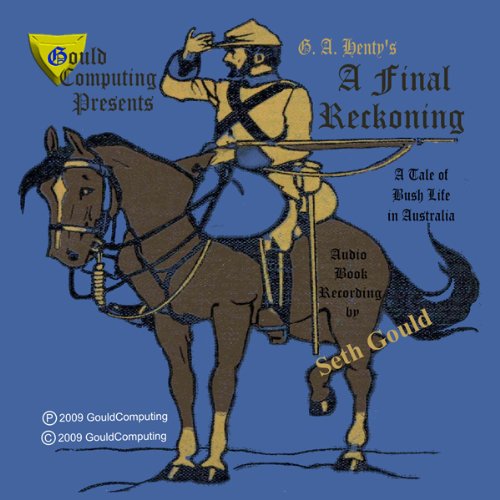 By: George Alfred Henty
Narrated by: Seth A. Gould
Free with 30-day trial

Join Henty's Hero on an adventure in Australia in the early days of its settlement, when the bush-rangers and the natives constituted a real and formidable danger. Reuben, a young English lad, after rather a stormy boyhood, emigrates to Australia, where he gets employment as an officer in the mounted police. Throughout, Reuben displays selflessness and endurance through trial. He encounters a dangerous life on the frontier, and must finally reckon with his past and an old enemy.

What listeners say about A Final Reckoning

Another Henty masterpiece, but Seth Gould's performance needs a re-run under the care of an editor. Serial mispronunciations are distracting, to say the least. However, the worst of it is the breathlessly running rat-a-tat monotone. The reader has no chance to absorb a situation or sense of any change of sensibility as words and sentences are piled on one-another indiscriminately, peppered with the aforementioned mispronounciations. Diction is good, and the sound level is consistent, so it has those things going for it.

This book compelled me to finish it even I don't listen to audiobooks often. The story was very enjoyable. The reader was okay.

Best book and reader ever.

Recommend to teens who want to learn a bit about history the fun way now.