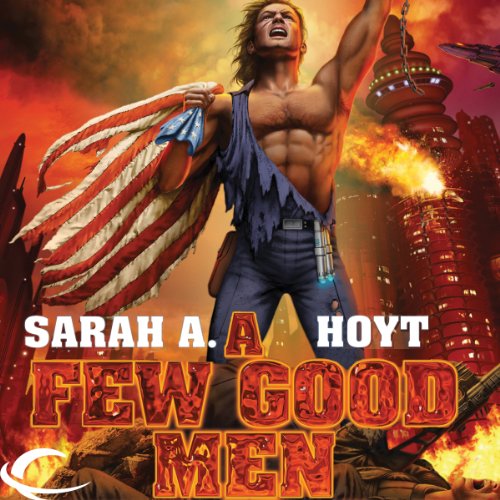 By: Sarah A. Hoyt
Narrated by: Basil Sands

On a near future Earth, Good Man does not mean good at all. Instead, the term signifies a member of the ruling class, and what it takes to become a Good Man and to hold onto power is downright evil. Now a conspiracy hundreds of years in the making is about to be brought to light when the imprisoned son of the Good Man of Olympic Seacity escapes from his solitary confinement cell and returns to find his father assassinated.

But when Luce Keeva attempts to take hold of the reins of power, he finds that not all is as it seems, that a plot for his own imminent murder is afoot - and that a worldwide conflagration looms. It is a war of revolution, and a shadowy group known as the Sons of Liberty may prove to be Luce's only ally in a fight to throw off an evil from the past that has enslaved humanity for generations.

What listeners say about A Few Good Men

A Worthy Successor to the Darkship Saga

What made the experience of listening to A Few Good Men the most enjoyable?

If you have read Sarah A. Hoyt's magnificent DARKSHIP THIEVES and DARKSHIP RENEGADES then you will love A FEW GOOD MEN. If you haven't, you really need to run out and buy them immediately on Amazon, Audible, or from Baen Books directly. I've been a fan of Sarah's for a long time now, mainly from her blogging and pithy commentary on the state of Science Fiction. Prior to reading this series, I was really quite ignorant of her fiction. I'm glad I rectified that, because reading her work is a lot like reading things Heinlein might have written in the middle of his career, like HAVE SPACESUIT WILL TRAVEL, or the incomparable SPACE CADET. It's not so much the specifics of her writing style as it is the type, pacing, and flow of the story. To be fair, lots of writers have written in this particular niche of space opera; what sets Sarah Hoyt apart is the depth of characterization, and in particular the maturation of characters as she navigates her tales.

In A FEW GOOD MEN we pick up the Darkship timeline between the events told in DARKSHIP THIEVES and DARKSHIP RENEGADES, and follow it until we are past the end of the adventures of Athena and Kit as told in those two volumes. Lucius Keeva is the disreputable scion of Good Man Keeva, one of the 50 hereditary rulers of the totalitarian oligarchy that Earth of the far future has become. Our story opens with Luce serving out his sixteenth year in solitary confinement, his seventeenth of overall imprisonment when a jailbreak occurs, the same jailbreak we read about in DARKSHIP THIEVES.
Luce returns to the world, reeling from his incarceration, which his father had ordered 17 years ago, and still traumatized from the death of his best friend and lover, Ben Remy. Over the course of the rest of the novel, Sarah skillfully reels us in to a world on the brink of total anarchy, torn between the despotic rule of the Good Men, whose secret history readers of the first two novels already know, and which Luce must discover, and the underground revolutionaries who have waged a secret war against them in the hopes of reestablishing a government of, for, and by the people. Luce also has to come to terms with his own existence, and decide for himself the man he will be, how he will live his life, and whom he will share it with.

The book is a space opera - the key word being opera - so there are elements of drama, tragedy, and of course, romance. In this particular case, the romantic aspects of the book involve two men, each reeling from a tragic end to their own relationships with their lovers, and the inevitable tension between them. What I like best about the way Sarah handles this, and the way she handles all the relationships and romances in her books, is the way she focuses on the emotional connection between people. It's very well done.
A FEW GOOD MEN is a rollicking good tale from cover to cover. I thought the writing was paced perfectly. Sarah uses an allegory to talk about Liberty, casting the ideology most of us would consider to be circa 1779 Federalism as a long banned religion of "Usaians" whose members all have names that will be very familiar to students of history. Sarah informs, educates, teases, and amuses with her clever puns and turns of phrase, and the way she treats the quest for Liberty as a religious matter, rather than a political one (or perhaps, not just a political one). I *highly* recommend it - of everything I've read by Sarah Hoyt so far, this is my favorite.

One final note in closing, because my it is relevant to a future post. I consumed these books both on Kindle, and using the whispersync and Audible to listen to them. The narrator is Basil Sands, who I think does a great job of voicing the characters and pacing the book. In my upcoming review of THROUGH THE FIRE, I'll comment more on why that's so important, but what I feel comfortable saying here is that readers, or listeners are in for a real treat no matter how you choose to consume the book. So please, do me a favor and run out and buy a copy.

I really liked the way Luce was written. The interior monologue shows a man with his own demons, weaknesses, and failings who somehow still rises to the occasion history demands of him. It was well done.

What does Basil Sands bring to the story that you wouldn’t experience if you just read the book?

I thought Basil Sands voiced the characters well, and made the narrative entertaining.

I chuckled quite a few times, and thoroughly enjoyed the book.

The Rise of the USAians!

Great story set in Hoyt's "Darkship Thieves" universe! The citizens of Earth rise up against the rule of the Good Men.

Some problems on Kindle.

I have a great deal of sympathy for the hero of this book. The author handles his trials with humor and sensitivity. This is a great extension of the Darkship series. Reading the first two books isn't neccessary but would help even though this book has only a brief intersection with the charcter and events of the first two books. I quite enjoyed this book and will recommend it to my husband and my teenagers.
I have read this book before but this tme I listened to the Audiobook. As usual there were many instances of missing words including the last sentence of the book. (On my Kindle App)

Narrator is miserable. Story is an overly simplified and romanticized view of the struggle for a theistic "democracy ", the symbolism of the American flag and the rights of gay men. And the same points are made repeatedly. The characters are uni-dimensional, Simply could not finish. The best part is the deceptive beginning. Returned.