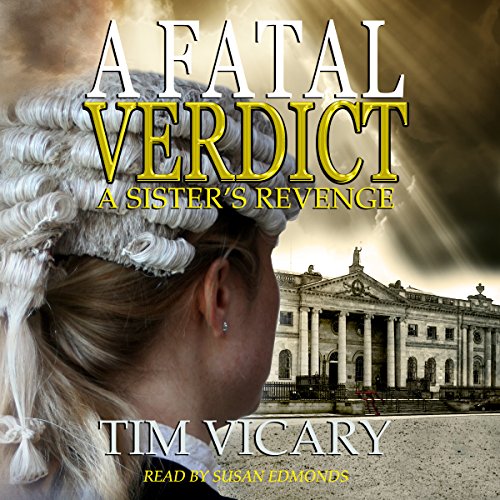 A Fatal Verdict: A Sister's Revenge

A Fatal Verdict: A Sister's Revenge

What would you do if someone murdered your child, but the justice system let you down?

Kathryn Walters is faced with this dreadful decision when her daughter, Shelley, is found dead in her boyfriend's flat. Despite the best efforts of the Crown Prosecution barrister, Sarah Newby, it seems possible that the boyfriend, David Kidd, may be acquitted. Should her family tolerate this? Or seek their own form of justice through revenge?

Sarah Newby finds herself defending a client who is reluctant to give evidence on her own behalf, and refuses to explain why she chose Sarah to defend her in the first place.

What listeners say about A Fatal Verdict: A Sister's Revenge

Continuing shortly after the end of the first book in the series, this story can nonetheless be enjoyed on its own although obviously it does contain spoilers for the first book. Not all of Sarah Newby's traits are admirable but she tries very, very hard and is largely successful in winning her cases and upholding her own moral code, striving for justice. As before, the cases revolve around the burden of proof required to convict and the reliance of the court on the forensic and other evidence developed by the police investigation. Missing details, missing minutes, missing clues, missing facts can warp the outcome pushing an innocent person into prison or freeing a guilty one. Again author Tim Vicary has come up with a fascinating and complex story which will tear at your heartstrings.

I had the pleasure of hearing the well-narrated AUDIO version which kept me enthralled throughout.

If you could sum up A Fatal Verdict: A Sister's Revenge in three words, what would they be?

Hard decision to make, when in ones grief, to let the court decide the justice for your child, that's now dead, or seek justice, another way.

What does Susan Edmonds bring to the story that you wouldn’t experience if you just read the book?

Sarah the barrister, brought that out more by hearing it

Different type of court, so would have missed if did in one .

Sarah Newby #2 was not only well-written but the plot, with it's twists and turns, was both clever and entertaining. Tim Vicary is fast becoming one of my favorite authors and I will be reading more of his books very soon.

Having read the first book in the series I expected more of this. It's uncomfortably long, drags, misses obvious plot links and the main character, Newby, suddenly drops out of character and, right when she should be fighting a case most fiercely, turns into a whimpering loser who's misses key evidence and fails to challenge witnesses in any credible way.

However, it's the reader that really ruins this. In a book with various characters and accents, this reader fails miserably. American characters suddenly turn into Devonshire farm girls and she can't even keep that consistent throughout.

Avoid the pain and read the next book in the series to yourself.

Easygoing read - not the best narrator

This is a good easygoing read but for me the narrator was not good enough. Her male voices often sounded feminine, and her efforts at an American accent when Miranda is disguising herself are risible. Later Miranda, born and educated in England speaks with an American accent to her mother - very unlikely after only a few years as an adult in the US. The narrator's voice in general is good, unobtrusive and not jarring, but she needs to work on male voices. Readers should take more care and practice accents before recording.