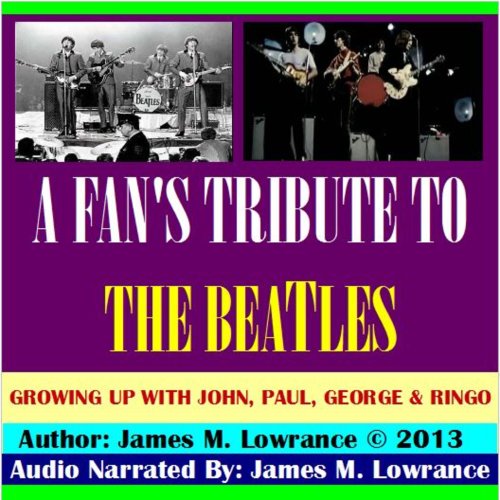 A Fan's Tribute to the Beatles

This audiobook is my personal tribute to the Beatles - Paul McCartney, John Lennon, Ringo Starr, and George Harrison. One might think, for just a moment, that my subtitle - "Growing up with John, Paul, George and Ringo" - would imply that I actually grew up with these men during my childhood. Well, I actually did grow up with them but not in the physical sense of having played with them as boys in the neighborhoods of Liverpool, England, or having attended school with them. (I was only a toddler when they invaded America.)

No, I grew up with the Beatles in the sense of their being the first musical influence that ever touched my life in a significant way. At the early age of six, I remember hearing my sister play her Beatles albums and singles. I listened to them with her at about age seven, hearing albums such as Abbey Road and singles such as "You Know My Name (Look Up the Number)." I realized that this group had an incredible range of diversity, from rock-opera type releases to songs with a great deal of humor in them. From that time forward, and throughout my life to-date, this amazing music phenomenon has made me laugh, cry, rejoice and feel romantic when courting my wife in the early 1980s.

Do I place the Beatles in the same category as a religious experience or something I could never have survived without? Certainly not. But I can say honestly that their music has brought more to my life than I would have experienced had I never discovered them. It is my hope that this audiobook helps to convey some of that experience to its listeners and that, at the same time, they can see in the chapters that follow, the humanity, struggles, and events that also impacted the lives of these brilliant music legends.

What listeners say about A Fan's Tribute to the Beatles