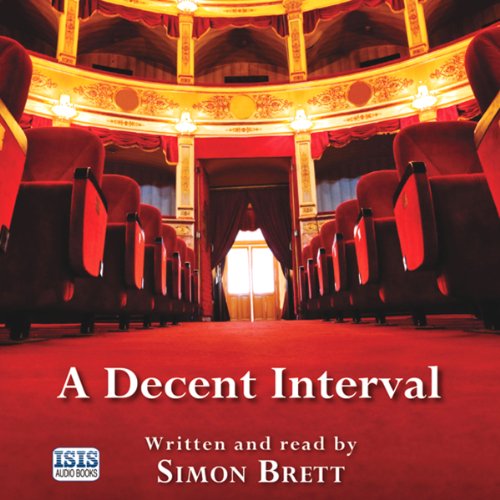 After a long period of "resting", life is looking up for Charles Paris, who has been cast as the Ghost of Hamlet's Father and First Gravedigger in a new production of Hamlet. Ophelia is played by Katrina Selsey, who won the role through a television talent show. Hamlet himself is also played by a reality TV contestant, Jared Root - and the two young stars have rather different views than the more experienced members of the cast.

But when the company reach the first staging post of their tour, matters get more serious, with one member of the company seriously injured in what appears to be an accident, and another dead. Once again, Charles Paris is forced to don the mantle of amateur detective.

What listeners say about A Decent Interval

I have really enjoyed Simon Brett's Charles Paris dramatisations so thought I would try a full length book. Initially I was disappointed, as Bill Nighy plays Charles so well in the dramatisations and in my head he is Charles Paris. However after a few minutes of listening to Simon Brett's narration I was so caught up in this story that I listened to it over a couple of days and will definitely download some more of these. As in the Fethering mysteries Simon Brett really brings the story and the characters to life. Great for an easy, fun listen.

Can't understand why a previous version of this book with a different narrator was allowed to escape. I hated that version, but knowing how much I enjoy Simon's reading, he is Charles Paris to my mind, I decided to give this version a chance. I was not disappointed. In fact I didn't actually remember more than the ending from the other version, which goes to show that the narrator can (and obviously does) make a huge difference.

Looking forward to yet more of Mr Paris in the future.

Excellent narration in which the characters really came to life. A highly enjoyable listening experience.

not as good as some earlier novels

Simon Brett's Charles Paris makes a welcome return.
For me though his antics in the 80s seem to fit the character much more than him having a mobile and taking about Twitter. His constant drinking of Bell's whiskey makes him seem a little dated now. SB's narration is brilliant, as always and I enjoyed listening to the full book. I just don't think it stands up as well as a lot of the earlier books.

It has been wonderful to listen to a new Charles Paris mystery written and brilliantly read by Simon Brett.
The dissolute lifestyle of Charles Paris continues, and his acting career maintains its bottom scraping trajectory, but his ability to solve crimes remains at its charming peak.
Well done Simon Brett