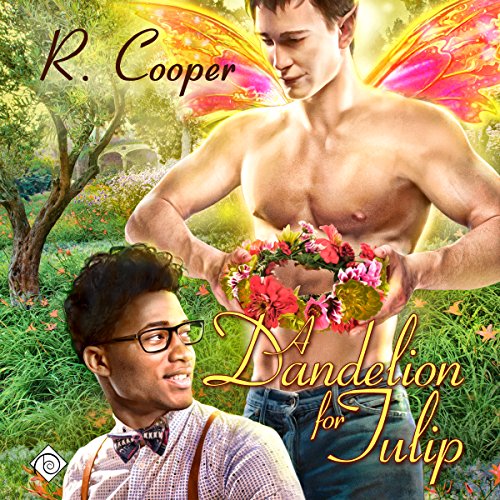 A Dandelion for Tulip

A Dandelion for Tulip

A Being(s) in Love Story

David is in love with Tulip, a kind and unusually quiet fairy in his social circle. But everyone knows Tulip doesn't date humans. David tells himself he is happy to be Tulip's friend, because he doesn't believe a fairy could love him and Tulip has never tried to "keep him" - as fairies refer to relationships with humans.

Fairies are drawn to David, describing his great "shine", but David knows only too well how quickly fairies can forget humans, and thinks he's destined to be alone. He can't see his own brilliance or understand how desperately Tulip wants him, even if Tulip believes David can do better.

But exhausted and more than a little tipsy at a Christmas party, David makes his feelings too obvious for Tulip to deny any longer. Because of a past heartbreak involving a human, Tulip is convinced someone as shiny as David could never want a "silly, stupid fairy" in his life. Now, if he wants to keep David, he'll have to be as brave as his shiny, careful human.

A wonderful narration, but slow it down a bit

Protip: listen to it on ×.85 speed. The actual performance was otherwise wonderfully done. The emotion was perfect and the voices excellent. Next time just slow down the actual reading a tiny bit more. Still a wonderful job.

The narrator mispronounced the word cocoa. Several times. Only literate people should be professional narrators.

There was little variety in character voices making it difficult to distinguish who was speaking.

I have enjoyed all the stories in this series. the narrator speaks a bit fast, but is good otherwise.

it is worth it

For fans of the series

I have enjoyed a couple of the books in this series, but I think – in general - that R Cooper’s writing style just isn’t for me. Or at least in audio format… I’m not sure if that would have made a difference – but listening to this just made me confused for a lot of the time.

On the one hand I really enjoyed the set up – post doc – fairies are part of society but “not” – David is the clueless human who attracts fairies but doesn’t realize it… But there were all these love triangles that confused me and made me frustrated.

I was also sick to death of David’s morose view of himself by the end. When two characters simply need a long discussion to settle things between them – The Big Misunderstanding – it makes me crazy- I kept thinking that if Tulip and David had just TALKED…

I loved the fairy magic and holidays and even the format for the story. Using the holidays as a way to move us forward through time was clever. What I didn’t like was the way our 2 MCs kept dancing around one another.

The narrator, Michael Fell, didn’t add much to this experience. He read nicely but didn’t add any extra flavor or zing – at times he was almost monotonous.

I don’t want to make it sound like this was horrible – it wasn’t. It just wasn’t that interesting – to me- and didn’t strike my fancy.

I highly suggest looking at other reviews – many others have enjoyed this. You don’t need to read the series in order, but I wonder if I’d read the book just before this “Frangipani and the Very Shiny Boy (Beings in Love, #5.5) “ if I’d have felt more strongly for this story. Frangipani and his Boy are in the story so…

This is a lovely, understated story and Micheal Fell's performance only enhances it. David and Tulip have both been hurt before and their journey towards reaching out and learning to trust again is, while raw at times, very emotional. Though set in a world where magical creatures are real and intermingle with humans the central themes and plot are so universal and grounded in reality that it hardly feels like fantasy. There are no grand quests here, only people struggling to find their place in a world much like our own.

Fell emotes well without being cheesy and gives characters voices that are distinct but not distracting. I highly recommend it.