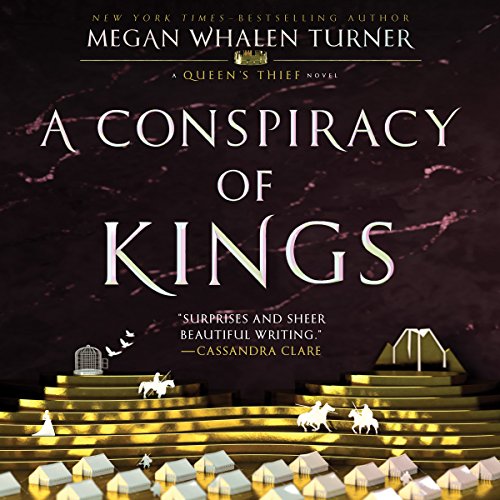 Discover and rediscover the world of the Queen's Thief, from the acclaimed series launch The Thief to the thrilling, 20-years-in-the-making conclusion, The Return of the Thief.

After an attempted assassination and kidnapping, Sophos, heir to the throne of Sounis, disappears. Those who care for him - including the thief Eugenides and the queen of Eddis - are left to wonder if he is alive and if they will ever see him again.

"The Queen's Thief books awe and inspire me. They have the feel of a secret, discovered history of real but forgotten lands. The plot-craft is peerless, the revelations stunning, and the characters flawed, cunning, heartbreaking, exceptional. Megan Whalen Turner's books have a permanent spot on my favorites shelf, with space waiting for more books to come." (Laini Taylor, New York Times best-selling author of the Daughter of Smoke and Bone novels and Strange the Dreamer)
" A Conspiracy of Kings brings the sweetest, sharpest kind of reading pleasure. Megan Whalen Turner's books are pure joy." (Rebecca Stead, Newbery Medalist and New York Times best-selling author of When You Reach Me and Goodbye Stranger)

What listeners say about A Conspiracy of Kings

Steve west is incredibly talented! He brings the book and characters to life. I don't know that I would have finished this book, without a bit of skimming, if it hadn't been for Mr. West. I am glad I finished it.

Of the 4 so far this is my least favorite, but such a great series!

This book starts slow, as most of the books in this series do. The story builds to a satisfying conclusion though!

Megan Whalen Turner has done it again. A Conspiracy of Kings is truly a masterpiece. The story follows Sophos, the heir to the kingdom of Sounis through a journey that changes the formerly innocent boy into a man with responsibilities and an understanding of the real world, while maintaining his sweet personality. The complex characters are what really brings the story to life. In many books the characters seem too perfect and unrealistic, but every one of Turner’s characters is complex and relatable, even the villains.

A little slower but advances the story

I found this book slower going than the previous titles and more convoluted in terms of plot lines and resolution. I'm still puzzling over the disagreement between Eddis and Sounis in the last couple of chapters. With that said, however, I am confident that it all fits into the grand scheme of things and I am enjoying the consolidation of power under the Thief. On a technical note, I noticed several instances of the narration skipping several minutes of dialogue at three different junctures, which was frustrating.

I love this author! And I love all her books. If you haven't read the others, you need to, from the beginning.

Mostly good but my least favorite of the series thus far.

This book fits in well with the rest of the series but too much war and strategy for my taste. It was a little hard to follow but maybe that's just because I'm not as interested in that aspect of the story. It is exceptional well tied together. As always I enjoy the intricacies of the relationships of the characters

When I saw that the main character wasn't Gen I was ready to hate this, now all I can do is grovel and ask for forgiveness at my naivety. Although I do like Gen better I by no means denounce Soph as a bad character and would recommend this book to any fan of the series. I hope they are not prejudice against this book as I was and if they are, I hope this review will be helpful to them.

I really like series, but I found this one a little hard to get in to. Especially on the heels of King of Attolia, which was so strong. Still a good listen. Really love Steve West. Just wish the end didn't have so many loose ends.

Right After an Author can't think of what else to

This is more of a spin off then really a part of the main story line. None of the major characters appear until the last couple chapters. The book lacked the flair of the others - it wasn't predictable but I never was really rooting anyone. It was more a very very long chase without a good feel at the end.