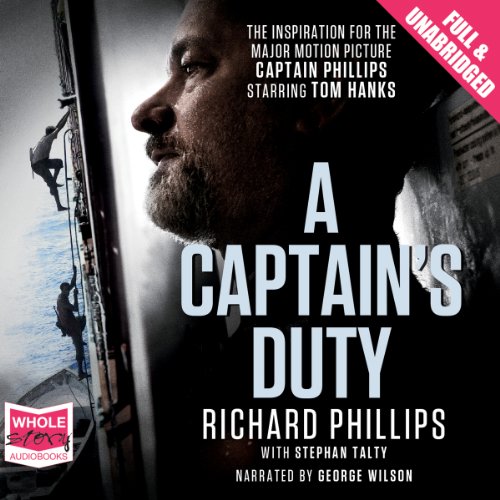 8th April 2009 was just an ordinary day for Richard Phillips, captain of the Maersk Alabama as it headed towards the port of Mombasa. Ordinary that is until, armed Somali pirates attacked and boarded the freighter.

Captain Phillips offered himself as a hostage in exchange for the safety of his crew, and so began a tense five-day stand-off, which ended in a daring high-seas rescue by U.S. Navy SEALs.

"I share the country's admiration for the bravery of Captain Phillips and his selfless concern for his crew. His courage is a model for all Americans." (Barack Obama)

Brilliant book. For those who saw the film, the film jumped half way into the book. The first half is about Captain Phillips journey to becoming the captain and leader he wanted to be. Phillips is an interesting man with an admirable thought process. I loved hearing how he reasoned past events of his life and current events during the hijacking.
It's well narrated. George Wilson sounds just like Tom Hanks which I found quite funny. I wonder if that's a coincidence. He made the story interesting and I have misophonia so the pace and particular sounds is usually a deal barker for me. Wilson has a very smooth voice, good at expressing emotions making the story very personal.
I always find it easier to listen to books that a told from one perspective. Long descriptions which usually works well on paper doesn't translate well into audiobooks, in my opinion, so it was a relief to find a book that was told as a story from a personal perspective.

The quality of the narration was generally very good. However, there were many long pauses suggesting a chapter break where in fact there wasn't one.

This was an absorbing book. I recommend it.

If you could sum up A Captain's Duty in three words, what would they be?

Captain Philips, because through the book we learn more about the man, his values and morals than we did from the film

Which character – as performed by George Wilson – was your favourite?

I watched the film before reading the book, therefore my favourite character was captain Philips as the narrator managed to make himself sound like Tom Hanks, and therefore the story became more believable as I could see the scenes from the film unfolding in my head

A fantastic book, very well read, and fills out all the details missed by Hollywood

Would you listen to A Captain's Duty again? Why?

What does George Wilson bring to the story that you wouldn’t experience if you had only read the book?

Character. He actually sounds like Tom Hanks who plays the role in the film

"Just when you though it was safe to go back ON the water...!"

True stories are the best.

True stories really are the best. Took. Little while to get going but the second half of the book was amazing. Really felt like I was there with Captain Phillips.

well narrated with detail beyond the film about how Mr. Phillips became a Merchant Captain

What made the experience of listening to A Captain's Duty the most enjoyable?

having endured some of life's tests, none as extreme as capt phillips, i deeply appreciate his ability and sharing of the humor it takes to survive or not survive with the dignity of never losing who you are. bravery can touch any life at any level but the willingness to give your own life to save others just made the depth of my admiration for the capt reach even deeper into my heart....thanks for sharing your story and your family and your life!!

What was one of the most memorable moments of A Captain's Duty?

captivating from beginning to end in a very human way

i almost did.....3 sittings due to busy schedule

I listened to this audio book after watching the film, the book is definitely worth a read/listen, covering extras such as how his family cope with events back home, news coverage, politics, the general life of a merchant mariner, shipmate duties, leadership (captaincy) and of course piracy. If you've seen and enjoyed the film, you'll like the extra details offered by the book... The story is of course exactly the same!