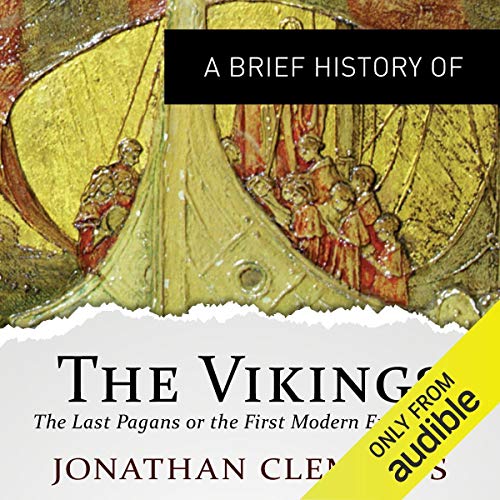 A Brief History of the Vikings

A Brief History of the Vikings

"From the Fury of the Northmen deliver us, O Lord."

Between the eighth and eleventh centuries, the Vikings surged from their Scandinavian homeland to trade, raid and invade along the coasts of Europe. Their influence and expeditions extended from Newfoundland to Baghdad, their battles were as far-flung as Africa and the Arctic. But were they great seafarers or desperate outcasts, noble heathens or oafish pirates, the last pagans or the first of the modern Europeans? This concise study puts medieval chronicles, Norse sagas and Muslim accounts alongside more recent research into ritual magic, genetic profiling and climatology. It includes biographical sketches of some of the most famous Vikings, from Erik Bloodaxe to Saint Olaf, and King Canute to Leif the Lucky. It explains why the Danish king Harald Bluetooth lent his name to a 21st century wireless technology; which future saint laughed as she buried foreign ambassadors alive; why so many Icelandic settlers had Irish names; and how the last Viking colony was destroyed by English raiders.

Extending beyond the traditional 'Viking age' of most books, A Brief History of the Vikings places sudden Scandinavian population movement in a wider historical context. It presents a balanced appraisal of these infamous sea kings, explaining both their swift expansion and its supposed halt. Supposed because, ultimately, the Vikings didn't disappear: they turned into us.

Jonathan Clements is the author of Pirate King, Moon in the Pines and Confucius: A Biography. He lives in London and Jyvaskyla.

Jonathan Clements book on the Vikings is well research and covers not only the history but gives us an introduction to the mythology of the Vikings. This is not a dry history book as he writes in a conversational tone and includes the stories of people almost like a historical novel. Mark Meadows does a fantastic job narrating the book with all the names and places. I would never have come close to the pronunciation of these words if I was reading the book to myself. Makes the audio format the best method for me to read this book. The title says a brief history but Clements sure did a good job of covering the earliest recorded dates to the current modern information including DNA to prove the data. I enjoyed the information on the British Isles as it tied into the information provided by Bernard Cornwell in his Saxon Series. Cornwell had also included some of the mythology in his book about the Vikings as well as the history of conquest and raids. Over all a great way to learn a bit about the history of the Vikings. I heard there is going to be a show about Vikings on T.V. also.

poorly constructed and untrue two Scandinavian and Icelandic people. I wouldn't waste your money. there are far more knowledgeable books to read and not only knowledgeable but accurate unlike this book.

Not narrated by Mark Meadows

Would you try another book written by Jonathan Clements or narrated by Mark Meadows?

Bought this partially because I like history, but overwhelmingly because I thoroughly enjoyed Mark Meadows reading another 'A Brief History ...' book on Victorian Britain. Very disappointed when the narrator announced a different name.
Not good, audible.
The narration is fine however - but not as good as I expected. If you are expecting the excellent Mr Meadows, be prepared.

a most excellently well written and narrated piece

loved it cannot recommend it highly enough.The narrator really brought this book to life for me.

It gives a perfect short overview of the vikings history, and still has a lot more details in it then you might expect. I think it is great as a start to learn about vikings in general, and from here you can get more interested in specific subjects. Some of the information was new to me and surprised me, and I think it is great when a book makes you look differently at a subject than before. The narration was pleasant to listen to, and easy enough to follow and kept my interest.

Just enough to dip a toe into Viking history!

As the title says, this account of Viking history is brief but to the point. Modern thinking on Viking history is based on archaeology and written histories from both the Viking perspective and those civilisations they interacted with. This book is a good starting point for deeper reading, being a chronological account of the sources, influences and evidence. The reader adds some action to the book, successfully stopping me dropping off while listening, so I don't recommend using it as a book at bedtime!
The only thing stopping this getting 5 stars, is the only passing mention of Viking activity in Wales, where I live and spend my spare time looking for evidence of them and other Europeans(Romans

Behold the Vikings, not who you thought they were

Would you consider the audio edition of A Brief History of the Vikings to be better than the print version?

Yes, the narrator engages you early on with a fine performance. It may be difficult to keep track of dates and names via the audio version, but the narration more than makes up for this.

it's comprehensive and gives you lots of background not only of the Viking world, the key players and the culture, but also a little on Norse mythology and also of the world the Vikings inhabited. Not to mention a good footnote on their legacy.

Probably the discussion of the Icelandic and Greenland having recently been on holiday to Iceland.

no, I dipped to and from on my way to work and at night in bed.

The 'brief history' series continues to impress, mostly due to the fine narrators being used.

Would you consider the audio edition of A Brief History of the Vikings to be better than the print version?

The wonderful narration is so much of my 'experience' of this book that I am not sure I would want to read a hard copy!

The dispelling of myths, and the exploration of how so many others came about.

Have you listened to any of Mark Meadows’s other performances? How does this one compare?

I will be searching out other works read by this narrator, as his reading is wonderful.

Better than fiction! The fantastic history of the Vikings and their heroes and kings should be taught in schools all over the globe. This audiobook is properly gripping and on top of a great listening experience, I learned a lot about Europe. I totally recommend the audiobook narrated by Mark Meadows.

disappointing, but now these brutal idiots did not build much, unless they settled and were educated by the church