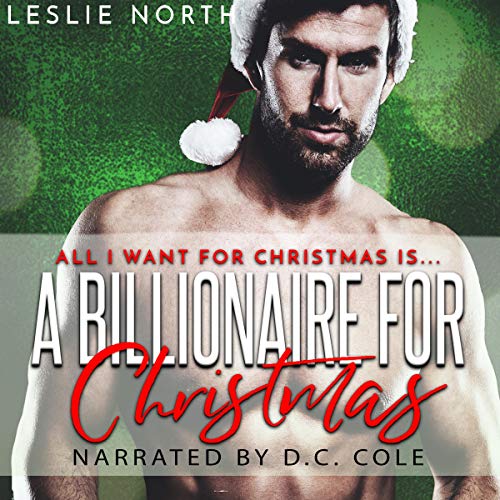 A Billionaire for Christmas

Snow is falling in Central Park, but this Christmas is going to be hotter than ever when a smart-mouthed journalist unravels a tightly wound billionaire.

When billionaire businessman Heathcliff Goldwin III returned home for the holidays, he never expected to be at the heart of a New York society scandal that thrusts him into the spotlight.

Attention is the last thing Heath wants, so when he learns his friend Murphy hasn’t heard from his journalist sister, Heath sees the chance to lay low and repay a debt to Murph. He’ll locate Aileen, keep her safe, and the whole scandal thing will blow over. But when he finds the petite brunette disguised as Santa and tailing a shady senator, Heath knows she’s in over her head. He should just tell Murphy where Aileen is and move on, but he’ll give her the chance to get her story...even if it means not letting her out of his sight.

Journalist Aileen Coen is hot on the trail of a crooked senator about to bilk innocent people of billions when her brother’s friend steps in to try and stop her. Even if Heath Goldwin hadn’t served in the Navy with Murphy, Aileen would recognize the Manhattan mogul’s handsome face and intense gaze from the tabloids all over town. He may be rich and powerful, but when Heath wants to drag her home to her brother, Aileen won’t back down...even if it means bringing Heath into the investigation with her.

As they work together to take down the corrupt politician, the chemistry between Aileen and Heath reaches the boiling point. Tight-laced Heath isn’t one to give his trust easily, but will Aileen be the woman to make him come undone?

What listeners say about A Billionaire for Christmas

Leslie North does not disappoint. I so loved this series and the performance by DC Cole. He brings the characters to life. This particular book is one of my favorites by the author. She has such vivid imagery and details of NYC, and has introduced us to some very intriguing characters. Murphy was my very favorite guy, and Aileen kept him on his toes. I loved how this book was tied in with the others thru characters, yet its own standalone story. I requested this review copy audiobook and have voluntarily written this review. I will definitely listen to more books by this author and narrator.

My favorite in the Series!

This is the third book in the All I Want for Christmas is… Series. This story is my favorite in the Series! Heath and Aileen's story is suspenseful, fast-paced, action packed, and sexy! I loved to see again Daveed, Melody, Murphy, and Shayma! DC Cole did an amazing and outstanding job with the narration! I enjoyed my listening.

A Billionaire for Christmas

Another great addition to this series. These two are so stubborn it becomes an issue for them, but lucky for us we find a happy ending with them. The narration is amazing! DC Cole never seems to fail with his narrations and this one is another perfect example.

Great story and characters made this an enjoyable holiday listen. Fantastic narrator as well, I loved listening to his performance. I received a free review copy of this audiobook at my request and I have voluntarily left this review.

The mystery of the missing sister is finally solved. Aileen is a pistol. She knows what she wants and is not afraid of a little risk. When her good heart and sharp investigative skills land her in over her head is when the fireworks start. Rescue comes in the form of a sexy seal with trust issues and an agenda. Staying one step ahead of the game, just got interesting and a whole lot hotter.

The Final Man Falls For His Friend’s Sister

Three friends in the military together, Davide, Murphy and Heath. Davide is engaged to Heath’s ex-fiancée, Murphy engaged to Davide’s arranged marriage fiancée and and Heath now meets Murphy’s sister Eileen...and he falls.
It’s been fun watching each man find the right woman for him, with added suspense, mystery, questioning if they will be in trouble falling for one of their friends ‘girl’.
Great charters, well written story and an epilogue providing HEA for these men.
The narrator does a great job, a deep voice and he dies a great job with the female voices, not trying too hard, just right..pacing and the revealing of the story done well.

I was given this free review copy audiobook at my request and have voluntarily left this review."

I want a Billionaire!

I've listened to many audiobooks by Leslie North, she never disappoints. I think this is the best book she's written so far. I love the characters, getting to know them and being a part of their lives as they grow closer.

D. C. Cole is perfect for narrating this audible. He puts you into the lives of all the characters, guides you through their pain, happiness, and disappointments until the total bliss that awaits the characters.

I was provided a copy of this audible free at my request. I'm thrilled to be able to provide my review.

I really enjoyed this story!!

I’ve listened to few in this series and I think I liked this one the best. I love both main characters very much.
D.C Cole does a fabulous job as always.

This little treat puts me right back in the Christmas spirit. The last in the series, we get to know Heath and Aileen. Heath is searching for Aileen, Murphy's sister. When he finds and learns what she is up to, he keeps her secret and helps her out. Their chemistry is hot, but this is a romance that should not happen! After all, Aileen is his best friend's sister! I love these little nuggets that Leslie North releases. They are fun and flirty, include a great adventure and the ensemble casts always are a blast to meet. Seeing Murphy, David and their wives again just gives that feeling of home. Heath and Aileen round out this series with all the feels, from annoyance to frustration to attraction to love, we get to go on their journey and see it brings them.

Narrated by DC Cole, we have nothing but fun! He brings these characters to life with his many voices and accents. I loved his performance, keeping true to the previous characters and he brings his sexy growl out with Heath. Action packed, his portrayal of this story is spot on and finishes out the trilogy with a bang!

Leslie does it again