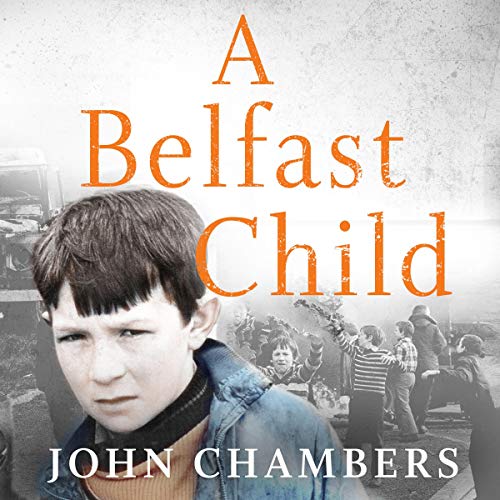 John Chambers was brought up on Belfast's notorious Loyalist Glencairn estate, during the height of the Troubles. From an early age he witnessed violence, hatred and horror as Northern Ireland tore itself apart in civil strife. Kneecapping, brutal murders and even public tarring-and-feathering were simply a fact of life for the children on the estate. He thought he knew which side he was on, but although raised as a Loyalist, he was hiding a troubling secret: that his disappeared mother - whom he'd always been told was dead - was a Roman Catholic, 'the enemy'.

In a memoir of rare power, John explores the dark heart of Northern Irish sectarianism in the '70s and '80s. With searing honesty and native Belfast wit, he describes the light and darkness of his unique childhood and his teenage journey through mod culture and ultra-Loyalism, before an escape from Belfast to London - where, still haunted by the shadow of his fractured family history - he began a turbulent and hedonistic adulthood.

A Belfast Child is a tale of divided loyalties, dark secrets and the scars left by hatred and violence on a proud city - but also a story of hope, healing and ultimate redemption for a family caught in the rising tide of the Troubles.

What listeners say about A Belfast Child

I have to echo the review of so many others. The narration of this book ruins what was otherwise a great 'read'.

Why do people think that performing a Belfast accent is just a matter of going up at the end of sentences and throwing in the odd "so he did". STOP IT. The accent has been butchered over the years by Brad Pitt, Tommy Lee Jones, et al. Would it not have been possible to have this book read by someone from Belfast? I would imagine that a large proportion of the readers / listeners to this would have experience / interest / knowledge of 'The Troubles' and would be able to tell the difference between a Belfast man and a Dublin actor. To that end I'll offer to read Angela's Ashes and throw in plenty of 'Begorrahs' and 'Patiddle de te bodaydoes'.

I am sure the irony of having the life of a West Belfast Loyalist narrated by someone from Dublin is not lost on people with any knowledge of the last 100 years of Irish History. Personally I wouldn't give that a second thought if the narration was not like sitting in a car whilst a learner driver grinds the gearbox.

Good luck to Patrick Moy. I place the blame for this squarely on Audible. I think their approach to that is summed up by the line from the book..... "Sure you're all Micks anyway".

Yes, I am a sucker for a gentle Irish accent but the lovely narration was just the icing on the cake of this beautiful book about life in Belfast during ‘The Troubles’. Social history stories like this are played out on different stages daily and when their honesty shines through like this story does, can only make a reader more compassionate to the issues faced by others.

As real as it gets.

Left Northern Ireland for the States at 19 with alot of the same emotions the author had. Read alot of books about back home but this book gives you the closest look into the mindset of a Protestant youth growing up in the troubles I have came across. Well Written and Narrated. Highly recommend.

Authentic Belfast in the 1970’s

An authentic story of a young boy growing up in west Belfast in the 1970’s (I was also there); but also one of his personal journey to adulthood and acceptance. I really enjoyed this book.
The narrator was very good, even though he did make one or two little slips (“h”) that only someone from N Ire would pick up.

John has definitely hit the nail on the head with this throw back to his youth in Belfast. Very accurate and amusing, can definitely relate with some of his accounts. Growing up in Ulster in the troubles well described.

His accent is CAT!

I am Belfast born and bred. The reader turned me off. I could not listen to him. Unable to finish the audiobook , I will buy a hard copy.

Great read, brought me back to time’s that were dark . However also made me laugh out loud . Fully threaded with a heartfelt family story filled with tragedy and the resilience that brought them together again “you can take the boy out of Belfast but you can’t take Belfast out of the boy “ excellant

A heart-wrenching and raw account of a nation torn by conflict, yet peppered with humour with precious nuggets of hope. A great read for people from our wee nation and for those trying to make sense of us.

Get a narrator that has an accent even remotely appropriate.

The narration spoiled a great story. Simply awful. Accent completely wrong for this. Many words incorrectly pronounced which ruined the authenticity. If you want a great Belfast story then buy the book, don’t listen to this. The story is superb and a credit to the author however this performance was horrendous.

Gritty, compelling and authentic reality of a traumatic dark episode in Northern Ireland. crafted with integrity and cutting honesty.

As a native of Belfast , around the same age as the author , this story had me in tears.
His story was honest, totally authentic and told without self -pity.
It transported me to a Belfast our children wouldn’t recognise and evoked long forgotten memories.
The narrator did a good job , but anyone from Northern Ireland would quickly pick up that he was not from Belfast and was not from the Loyalist community. Just an irrelevant but interesting , point ,

As a catholic I thought this book would give me an insight from across the divide .
I enjoyed this so much . I laughed and cried .
After I finished I truly believed I knew John as he could have been any one of my family .
It was very open and honest .
Thank you john for sharing your life .

What an eye opener

I throughly enjoyed this book very personal and gave great historical knowledge I will be recommending to my friends. I’ve learnt so much thank you

Fantastic, really enjoyable.
Being from Belfast and some knowledge of that time frame made it an essential listen.

An interesting story of Belfast through the troubles and beyond.
A reminder of how it was in Northern Ireland even if you have lived in Belfast or never had. This book can take you there with no holes barred in the division of two religions, as they battle through the troubles and sectarian hate, till the peace shared by all today. A writing of self portrait with family and friends and the social enjoyment and heartaches to a new beginning in England.
I grew up on the borders and can relate to some of the storie and reminder day trips across the border to go shopping in the north Enniskillen t's amazing what was normal to us getting searched going into shops, bomb scares, road check points etc.
Thank god we live different times now