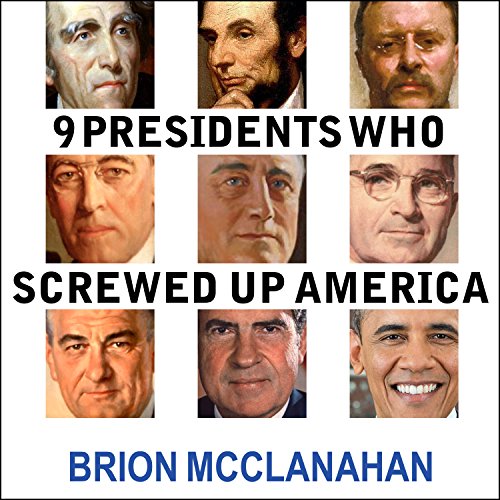 9 Presidents Who Screwed Up America

Of the 44 presidents who have led the United States, nine made mistakes that permanently scarred the nation. Which nine? Brion McClanahan, author of The Politically Incorrect Guide to the Founding Fathers and The Founding Fathers' Guide to the Constitution, will surprise listeners with his list, which he supports with exhaustive and entertaining evidence.

9 Presidents Who Screwed Up America is a new look back at American history that unabashedly places blame for our nation's current problems on the backs of nine very flawed men.

"This book is both a fascinating read by a master historian and a necessary guide for any voter." (Kevin R. C. Gutzman, author of James Madison and the Making of America)

What listeners say about 9 Presidents Who Screwed Up America

I bought this believing it was a history book, but quickly realized this is only a political opinion piece. Even when measuring the book as an opinion, it fell short of it's intended purpose. The author lacks subjectivity and shows a clear conservative, Republican bias. If a potential reader believes Ronald Reagan was all good and Barack Obama is the spawn of Satan, then you will probably enjoy this book.

The author expects a reader to accept two important themes. After close inspection of each, major flaws become obvious. The author's entire premise for the book melts away like ice cream in hot sunlight.

First, he asks us to believe that our government's success or failure rides predominately on the President. He actually states, "American's have to believe that the most destructive element of government is not the Congress, or even the laws that are passed, but the illegal expansion of executive power in the last 150 years". This is absolutely absurd! I don't have the space here to list all of the catastrophic laws that have been passed by Congress. Possibly even worse than Congress is our Judicial system, where Justices are appointed for life. 'Citizens Untied', a Supreme Court decision, has all but legalized bribery through dark-money campaign contributions. Where unlimited, untraceable money flows, greed and corruption grow. Corporations and new age robber barons are currently pulling the strings of our broken government (both parties!). Our entire system rests on a 3 legged stool. It is a detriment to us all if this author succeeds in convincing voters that two of the legs are unimportant and should be completely ignored.

It seems that the author's personal bias tainted his work. Again, he is attempting to measure all presidents based on a strict Constitutional interpretation. As one that tried to save her, he touts Thomas Jefferson. I believe he has a major man-crush on President Jefferson. Although he mentions the Louisiana Purchase toward the end of the book, he completely fails to mention it while lavishing praise on Jefferson. Although the Louisiana Purchase was a great event in US history, it was NOT constitutional for President Jefferson to use the Executive Branch to negotiate a massive land deal with France. When using the method created by the author, for the purpose of judging Presidents, the Louisiana Purchase alone should not only have plucked Jefferson off the good list, it should have put him at the very top of the bad list.

Another example of the author's bias reflects in his glowing words on President Reagan. I am not asserting whether Reagan was a good president or a bad president. I am only pointing out that if Mr Reagan were judged by the same ridiculous standard as the 9 Presidents shunned in this book, he too would have occupied a spot on the bad list. Under President Reagan, the Executive Branch acted against the will of Congress, sold weapons to Iran, and used the proceeds to fund the Contras in Nicaragua. I'd challenge the author to show where in the Constitution that power is granted to a President.


This book took on a big task, which was to convince us to evaluate presidents in a different way. It failed! First, it failed to show why this was even necessary, and second it created results that were flawed and pointless.

I love, love, love this book! Anyone even remotely in American history, the American Presidency, or America as it is today should buy this masterpiece!

Required Reading before the Election

This is not a simplistic book, but all true Americans should read it before they vote in November 2016. It is guaranteed to step on your toes, whether Republican or Democrat since neither party escapes the constitutional scrutiny of McClanahan. If you have ever wondered how we arrived at the Imperial Presidency of Barak Obama, this book shows you the path and corruption of the most brilliant form of government ever conceived by human intellect. If you are a partisan political hack, you will need to put away the Kool-aid, and actually use your brain.

Very interesting but don't be gullible

Mr. McClanahan states over and over that actions taken by certain Presidents do not conform to the way the "founding generation" viewed and interpreted the Constitution. At the same time he says that George Washington & John Adams were the first Presidents to violate the Constitution and Thomas Jefferson had to correct their errors. He doesn't acknowledge that all three men were part of the founding generation and that opinions of the founding fathers were far from uniform.

I’ve never agreed with the list of greatest and worst presidents. This gave a clear outline and then explained why they were the worst or best.

I wanted to see what this was about. I found it intriguing although a little heavy. MADE ME THINK and that is what I wanted. Very interesting ideas.

A very interesting look at the presidency from a unique perspective that of a strictly constitutional one. I was surprised at how much power has been sent in the wrong directions and then stays there because that is "how we have done it before"

Very informative book. Although I do not agree with all the author's viewpoints, he is correct in 95% of what he is saying.

Traditionally presidential ratings systems place the activist presidents such as Lincoln, the two Roosevelt's, Wilson, etc at the top of list. Under most systems the further a president is from the constitution as the founders envisioned it the greater a president you are. But, this book is different. The more a president adheres to the constitution the greater he is. Consequently, McClanahan's list is upsides down from most presidential list . He place the usual low riders John Tyler, Grover Cleveland, Calvin Coolidge ,etc . at the top and the usual presidential gods at the bottom. Unfortunately he doesn't evaluate all of the presidents, only a few and I would like to see him do a full fledged evaluation of all of our chief executives from Washington to Trump, but this book is a good first step.

would love to hear an expansion

I loved it and would love to hear an expansion on the good presidents that were mentioned.