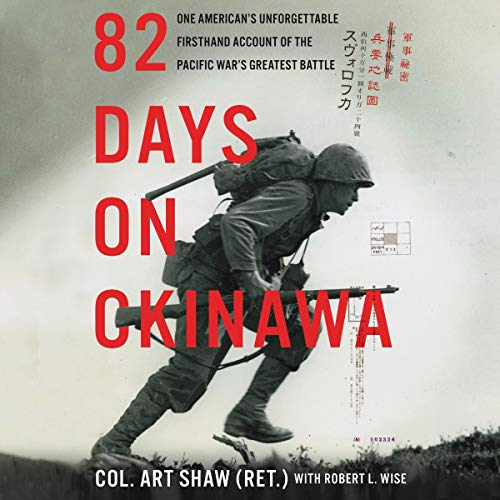 In celebration of the 75th anniversary, a riveting first-hand account of the Battle of Okinawa - the Pacific War’s "bloodiest battle of all" (New York Times) - from the first officer ashore, who served at the front for the battle’s entire 82-day duration, heroism that earned him a Bronze Star.

On Easter Sunday, April 1, 1945, 1,500 Allied ships and 1.5 million men gathered off the coast of the Japanese island of Okinawa and launched the largest amphibious assault of the Pacific War. They expected an 80 percent casualty rate. The first American officer ashore was Major Art Shaw, a unit commander in the US Army’s 361 Artillery Battalion of the 96th Division, often called the Deadeyes. For the next three months, Major Shaw and his men served at the front lines of the Pacific’s bloodiest battle, their artillery proving decisive against a "phantom enemy" who had entrenched themselves into rugged, craggy island. Now, at 98, Art Shaw looks back to tell the story. 82 Days on Okinawa is an extraordinary eyewitness account of this critical World War II battle.

The first step of Operation Downfall - the ground invasion of Japan - the Battle of Okinawa became legendary for its brutality. Over 82 days, the Allies fought the Japanese Army in one of the bloodiest campaigns of the war, one in which more than 150,000 soldiers would die. When the final calculations were made, the totals said that the Deadeyes had killed 37,763 of the enemy. The 361 Field Artillery Battalion had played a crucial role in victory. It would be the last major battle of World War II, and a key pivot point leading to the bombings of Hiroshima and Nagasaki, and the Japanese surrender in August, two months after the siege’s end.

A riveting first-person account of this turning point, 82 Days on Okinawa joins the ranks of Donald Stratton’s All the Gallant Men and Dusty Kleiss' Never Call Me a Hero.

What listeners say about 82 Days on Okinawa

I gave up after a couple of pages.

If you are interested in the history of the battle, don't bother with this book.

Questionable work by the ghost writer

Says the Japanese were firing a 155mm at the author from close range? They did not use 155mm And it’s strictly a long range cannon anyway. No artillery officer would imagine this

First the author has it as a battery of 105 mm then a few lines later it turns into a 155mm battery, then back to 105mm.

Says cobras aren’t native to the Philippines, except they are on Okinawa.

Dialog is just so hokey it has to be invented by the ignorant ghost writer.:

“Keep your heads down men! The Japanese may be aiming at us!”

I’m on chapter 7 and I’m done with this contrived story.

excellent story my Dad was in the 96th .

My Dad was in the 96th division nice to hear about it from someone who was also a member of that division.

The Price of Freedom

This is a story that needs to be heard by everyone. Freedom isn’t free, it is bought and paid by the blood of heroes called Soldiers, who gave their all to keep the USA free of tyranny and evil. Freedom can easily be lost by those who take it for granted, unfortunately an all too common occurrence these days. If you want to know a true hero, read this book. True heroes are not those in power or prestige, they are the ones who leave family and home behind to endure unimaginable circumstances to fight for something greater than themselves. This book is about those heroes, some who gave everything and did not return home. For many who lived, the war did not end upon return to home. This book brings to light little known acts of valor by common, ordinary men. A true, first person account of the horrors of Okinawa, well read by the narrator. How many would pay this kind of price in today’s world to stay free?