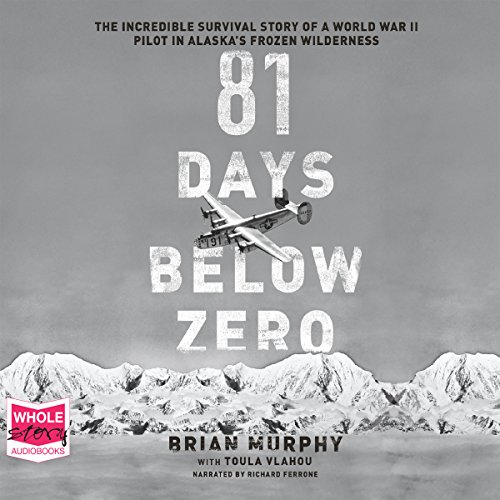 In 1943, five Army aviators left Alaska's Ladd Field on a routine flight to test their hastily retrofitted B-24 Liberator in harsh winter conditions.

The mission ended in a crash that claimed all but one - Leon Crane. With little more than a parachute for cover and an old Boy Scout knife in his pocket, Crane now found himself alone in subzero temperatures.

Crane knew that his chance of survival dropped swiftly with each passing day. This is his story.

"This is a great story, wonderfully told...seamlessly interweaving the pilot's intense struggle against the elements with the broader history of the war, Alaska, and the home front." (Eric Jay Dolin)
"Murphy's instincts for pacing and re-creating emotions, dialogue and details are so finely crafted that you might find yourself shivering right along with Crane." ( Minneapolis Star Tribune)

What listeners say about 81 Days Below Zero

In all fairness, the narration was fine.

What character would you cut from 81 Days Below Zero?

This book is supposed to be the incredible story of a World War II Pilot in Alaska's Frozen Wilderness and simply isn't. Im 5 hours in and the majority of the damn thing jumps from irrelevant historical passage to irrelevant historical passage with a bit of "oh, he's a bit hungry now" thrown in. If you're looking for a gripping story of incredible survival, as I was, I'd suggest examining your cat litter tray before listening to this garbage.

Yeah, the title is false advertising.