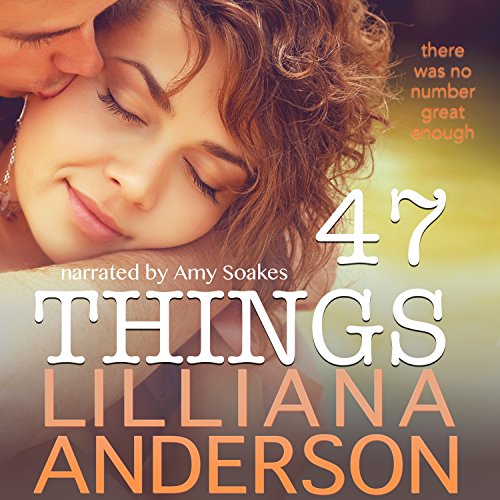 That was the first thing. I wasn't his sweetheart, and he should have already known my name. But, that was the moment I became caught in Tyler Lohan's sight. He was wonderful and complicated, and I'd spent my life trying to hate him for being the golden boy who had everything so easy. However, as with all things, Tyler wasn't the person he appeared to be from the outside, and once I saw him - the real him - I fell, and I don't think I ever got back up.

There would be a total of 47 things that sucked me into Tyler's life then forced me away. Forty-seven things that ruined me forever.

Forty-seven was never going to be enough.

There was no number great enough.

47 Things is a non-traditional, standalone romance that follows a couple as they come to terms with falling in love in a world they can't control, and the certainty of the inevitable.

The story was great. I was touched and felt close to them while they struggled to stay close to each other. Only issue was the narrator lacked feelings. She was describing very heart renching scenarios and dialog in a very flat tone. Maybe not flat but speaking in a very matter of fact way. This was slightly off putting. Otherwise I am glad I picked this book.

Balling my eyes out

This book was well written and the narration was great but the story had me crying from about the middle until the very last word!

Love love love
Read awhile ago and just got to listen to the audio before the next one comes out!! I love this story! It makes me smile and makes me cry. I love the Golden boy and Sarah. Their story makes me feel. It makes you think. It is awesome. Thank you

I listened to the audiobook. A real tear jerker. A m/f contemporary. I will read this author again.