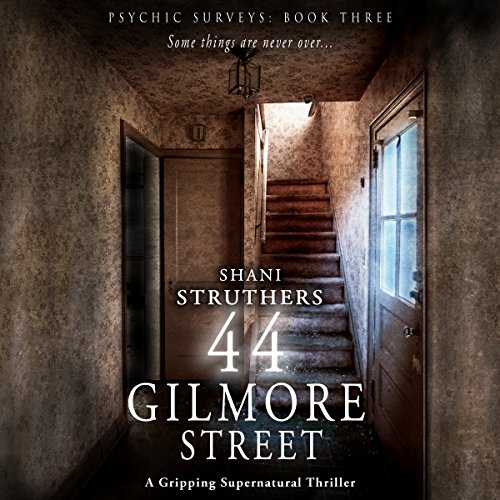 From Shani Struthers, author of The Haunting of Highdown Hall.

44 Gilmore Street, the third in the popular Psychic Surveys series.

We all have to face our demons at some point. Psychic Surveys - specialists in domestic spiritual clearance - have never been busier. Although exhausted, Ruby is pleased. Her track record, as well as her down-to-earth, no-nonsense approach, inspires faith in the haunted, who willingly call on her high street consultancy when the supernatural takes hold.

But that's all about to change.

Two cases prove trying: 44 Gilmore Street, home to a particularly violent spirit, and the reincarnation case of Elisha Grey. When Gilmore Street attracts press attention, matters quickly deteriorate. Dubbed the "New Enfield", the ghost of Gilmore Street inflames public imagination, but as Ruby and the team fail repeatedly to evict the entity, faith in them wavers.

Dealing with negative press, the strangeness surrounding Elisha, and a spirit that's becoming increasingly territorial, Ruby's at breaking point. So much is pushing her towards the abyss, not least her own past. It seems some demons just won't let go....

What listeners say about 44 Gilmore Street

I loved the story! It was a really unique premise and well done and developed. However, Ruby's whining really got on my nerves, pretty annoying. I just wanted to smack her.

I really enjoyed the Psychic Survey books. I become invested in the lives of Ruby, Cash, Ness and all the others. Highly recommend especially if you're on a car trip!

These stories are really very good but the Audible version can't be recommended. The reading is so appallingly bad you'll want to scream. this woman reads as if she was telling a story to kindergarten children and the voices she puts on are horrible. Stick to the written version...

These are really nice stories. The kind that make you feel like curling up in front of a fire. The audio books are ruined however by the awful narration. Every single word is emphasised. The characters voices are shockingly bad - they sound like cartoons for very young children. It’s as if Sheila Dearden thinks that she’s reading these stories to 2 year olds. The impact of the writing is lost because the narrator doesn’t seem to realise that you don’t create atmosphere (which the stories already have) by filling every single word with some huge emotion. It just takes away from the story and it’s sooooo irritating. I don’t understand why the publisher isn’t using an actor. It’s such a shame. It’s an injustice to the author.

Hauntings with a difference

These books are so full of life and characters. They’re a mile a minute & the people in them are brilliant. Ruby who runs the business, Ness & Theo who balance things out, who if I’m honest are my favourite characters. The interactions are fab.
The story this time had a kick to it that really got me going! I didn’t expect it to go the way it did. Really good!!
The narrator was lovely, a calm voice that kept me interested. In fact I listen at work & talk during the stories not these I pause these. Can’t miss a bit.
Excellent & well worth your credit or money

Another thrilling story from the psychic surveys. You will find a true connection to the characters yet spooky enough that you can’t put it down without knowing what happens next.

another great listen ,although I would like ruby to have more self belief I guess it shows the strength of the group onward to the book

Very good keeps you interested until the very end