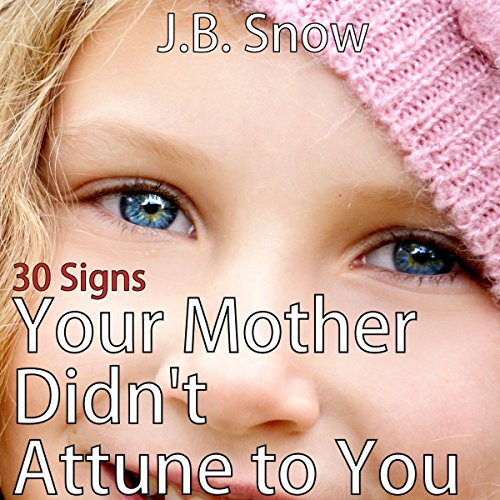 30 Signs Your Mother Didn't Attune to You: The Emotionally Absent Mother

Many people reach middle adulthood confused as to why they have felt significant amounts of suffering throughout their lives. Most of my listeners who write to me are still trying to pick up the pieces in their lives from broken childhoods. They are still confused about who they are and where they are going.

People who have experienced emotionally absent mothers often struggle with problems at work, problems in future relationships, and problems with raising their own children. They feel that they have outgrown the control that their mothers once had on them. They embark on their journeys into the world with high hopes and then find themselves, decades later, still unable to rid themselves of the little voices inside their heads.

A mother's voice instills in us our morals and values in who we choose as partners later in life. If our mothers tolerated emotionally unavailable mates, it is likely that we will also tolerate them. If our mothers didn't teach us how to bring out the best in other people, we will always wonder why we seem to bring out the worst. We will become disparate, distraught, and discontent.

If our mothers were content in wallowing in their misery instead of implementing positive growth and change, then they may also pass these traits onto their children. A child who is not constantly taught patience and perseverance will always be impulsive, cranky, frustrated, and chronically unhappy.

Many people think that their mothers made conscientious choices that caused them to have a poor quality of life. The truth is that some of these mothers had underlying brain wiring and genetics that may have caused them to struggle all of those years. Their problems may have gone largely undiagnosed. These caused them to choose the wrong partners, be unable to attune to their children, and to sometimes fail in their career pursuits.

What listeners say about 30 Signs Your Mother Didn't Attune to You: The Emotionally Absent Mother

You Get What You Pay For

Very concise, and bombards the reader with analogous terms for self assessment, and then an attempt at putting your Self in your mother's shoes - w/o naming it... compassion, empathy, or forgiveness.

This must be listened to at slower speed, so to CONTEMPLATE non judgementally.

For this topic, one assumes that the reader is "feeling" discontented, fearful, longing, concerned, and lacking. Unable to receive or give Others empathy, understanding or compassion as one cannot give what they did not receive.

Although.... One can learn to attune to their own needs, and all Others, if they want to.

Reading Wise -
RE: Childhood development
i would lean towards works conducted by pediatricians leading with Attachment styles, to extrapolate the knowledge and intricacies of emotional expression or repression/illness connections throughout adulthood.

And, i am surprised NOT to read the obvious ...
How do we KNOW how our Mother attuned to Us(?
Is how we react to our own children.

Do You get up 5 times a night when your baby cries to check.... Are they hungry, in pain or ill, in fear(?

Do You ignore them and let them cry most of the time.
(Neglect of a helpless person)

When your child frustrates you, do you treat them the way you WISH your mother treated you(?
Or, do you shame them for having needs(? (hunger, comfort, pain)

Do your children do drastic things, act out(?
A sure sign that compassion and empathy is in short supply.

Readings:
When The Body Says No - G.M.
It Didn't Start With You
Dirty Genes
Attachment - A.L.
Relationship RX - S.T.
Learning to Love Your Self - G.H.

Too extraordinary for words

Snow has summed up most of my experiences with my mother in her 30 signs but best of all, the suggestions on how to make things better gave me insight that there is hope for me. Listen/read it! It is outstanding family dynamics analysis.

how to get a workbook

workbook needed...PLEASE. as an emotionally abused mother and one in counseling I need to stop the cycle.