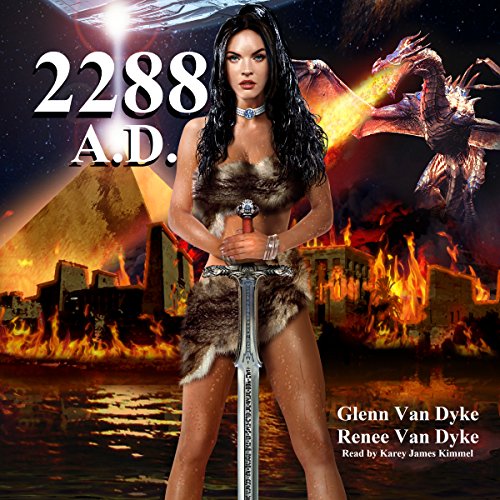 While 2288 A.D. can be listened to as a stand alone novel (and it has no cliffhanger ), we strongly, repeat strongly, recommend you first read or listen to Book 1, 2287 A.D. It is where the characters are first introduced, and there is much to be learned about the far reaching arc of the story line and why they make the choices they do.

And now, the fun stuff (synopsis):

The first novel, 2287 A.D., tells the story of Ashlyn Parker and Steven Sherrah, the man who is in command of Earth's last surviving starship. He has been struggling to keep the handful of Earth's survivors alive, hiding from the most vicious and powerful enemy humanity has ever known, an enemy that is relentless in its determination to see that every last human is killed.

Without wanting to give away spoilers, 2288 A.D. starts where the first novel ends. It will take them back in time almost 7,000 years. This is where the secret that Ashlyn holds is revealed. It will lead them on an incredible journey of time travel through strange new worlds, changing the history of the universe.

Like 2287 A.D., 2288 A.D. is packed full of action and adventure. Personally, we hate a three-page description of how a star-drive engine operates. We hope that you too will enjoy a story that moves quickly.

What listeners say about 2288 A.D.: A Time Travel Sci-fi Fantasy

Not sure wear happened here, first book was awesome, this one disappointed badly. Only one story line and uneventful one at that. The whole book is about single character's journey. That journey is supposed to be long and difficult, except length or difficulty were not communicated to the reader with the way various events were depicted.

Overall, book needs more careful editing/proof reading. Same phrases are repeated multiple times in short succession; makes it sound like there was a lack of imagination.

Audio book was annoying with "chimes" between every chapter. They were incredibly distracting and completely out of context. Chapters are fairly short, so it seemed like you were hearing them all the time. Performance of various voices sounded strained. Even with the very few characters that were in the book, it was difficult to tell who was speaking based on the voice.

I'd pass on this one.

Can't believe this is from the same author

It's exactly what you would expect in a science fiction story if I was to write it... GENERIC AND EXPECTED. I tried listening to this at least 20 times and could not get through it. The first book I couldn't put down. Now I want to go back and see if I really thought the first one was good!