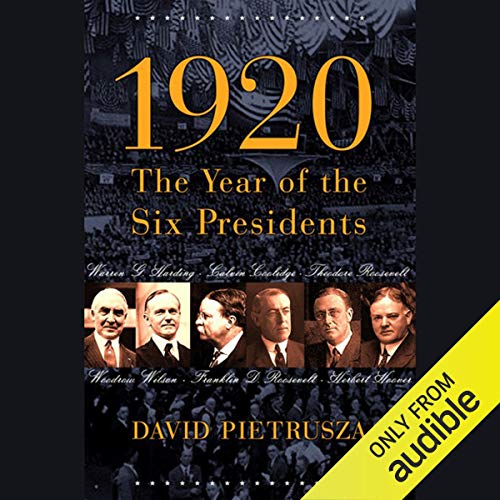 "Narrator Paul Boehmer involves himself and listeners by employing subtle emotions. One can hear appropriate inflections—sadness, joy, and petulance—in his words. His sentences flow into a comfortable narrative that sometimes includes poetry. Not resorting to any vocal characterization, he distinguishes the quotations with short pauses." (AudioFile)

What listeners say about 1920

A fascinating view into the US at the end of WWI

This book by David Pietrusza is a fascinating view into US politics, and related social conditions, in the decade of WWI. Readers will learn much about Woodrow Wilson, Warren Harding, Teddy Roosevelt, Eugene Debs, FDR and a broad cast of other main and supporting characters. Pietrusza uses the election of 1920 as the lever for putting all of these characters together, although much of the book's story really isn't dependent on that event.

Critical reviewers of a book like this typically call the thing "sprawling," by which they mean it is only loosely connected together, and perhaps a bit superficial in parts. And that might be a fair characterization of this book. But as long as you understand it is "sprawling" going in, not a scholarly work and not a narrowly circumscribed, in-depth work, you can enjoy it for the way in which it describes America (its despicable politics of that day, along with some admirable characters it would be cool to meet face-to-face) in the teens and twenties.

The book is well-written (if sprawling) and very well narrated. My interest did not abate even though it is overlong.

All wanted the presidency...

Now this is a book that links men of different political aspirations and regional persuasions to all collide around 1920. The author connects the men through the links to the office of the president. Included in this book are interesting tidbits about each man, such as a thorough background on Herbert Hoover, --who knew his was a geologist by trade and spent quite a bit of time in China early in his career? The book is packed with all kinds of threads between men and how their presence changed the course of American history.
After reading this book I became more interested in finding out more in depth information on three of the men detailed, especially Woodrow Wilson.
Really enjoyed it!

Each chapter was an individual history lesson. Women's rights, each individual President gets at least one chapter, KKK and racism, Harding being accused of being black, his girlfriends, and his presidency and death. Eugene Debs is given a chapter as is Sacco and Venzetti.
History really came alive for me.

What was one of the most memorable moments of 1920?

Each of the President's portrayed here became human beings, warts and all. If anything, I learned that Presidents are some of the most flawed men that have ever existed. Winning is everything.

Have you listened to any of Paul Boehmer’s other performances before? How does this one compare?

I don't remember ever listening to any of his other performances. I enjoyed this book and his reading of it immensely.

The women's rights movement was harrowing. The women who fought for our rights were more than heroes, they were warriors. The moment that particularly moved me was the vote by the Tennessee congressman for the amendment, changing his vote because his mother wrote him a letter asking him too.

This is a complete and comprehensive narrative of the year 1920 election. It encompasses other years to explain what lead up to this election and the results after the election. I did not find any biases towards any of the presidents. They all were treated fairly. An eye-opening book.

This is an interesting book that does a respectable job setting the tone & providing facts relative to the election of 1920. The author makes the characters very human, and overall I found the story interesting. The narrator is clear, providing appropriate inflection & good timing.

There is one overwhelming aspect of this audio presentation that is just awful, however: there are many, many instances where the story provides long lists of voting-related data. These are lists of things like: how much campaign money each candidate raised per state, how delegates voted over the course of national conventions, how many votes each candidate received, etc... Numbers are read long-hand (e.g. "Brown had one hundred twenty-two thousand, seven hundred and ninety votes. Wood had one hundred and five thousand, one hundred and sixty-one votes. Harding had ninety-eight thousand, one hundred and twelve votes..." and more), and the lists tend to be long, having eight or ten numbers in them...they feel interminable. Unfortunately, this book is chock-full of these lists; they simply do not translate well aurally.

The result is that the listener is subject to minutes-on-end of lists of numbers...this makes an otherwise good story, trying. In a hard copy version, the reader may glance at the numbers, quickly determine who was best, who was worst, etc., and be done with a list of statistics in a few seconds. In this audio presentation, the lists - and there a many - drone on and on and on... and on. I stopped listening to this book twice, to listen to other books.

Good story, but I can't recommend it in audio format.

This era of our history is probably one of the least understood or studied it seems among the general public, and this book does a fantastic job of filling in the blanks.


The only negative is the narration. The speaker has a great voice, and his style would probably fit any number of other books quite well, but it borders on distracting for this particular book. Melodramatic I guess is what comes to mind, but it just doesn't work.

Four stars based on the book itself though.

Women's first election to vote in

Pietrusza begins with sketches of the major players and the lesser players and masterfully weaves them into the events of the day, the peace negotiation ending WW1, the battle over the League of Nations, prohibition, the women's suffrage (19th amendment), the rise of the Ku Klux Klan, the peculiar hobby of lynching, the effect of the Bolshevik revolution on domestic radicals, Sacco and Vanzetti and the Boston Police Strike.

The sitting president Wilson who has lost nearly all his grip on the presidency and reality from a stroke vainly attempts from his sick bed to engineer a third term. Theodore Roosevelt who's sudden death in 1919 suddenly throws the race wide open. The election of 1920 was one of the most dramatic ever seen. For one time in the nation's history six once and future presidents hoped to end up in the white house. Woodrow Wilson, Warren G. Harding, Calvin Coolidge, Franklin D. Roosevelt, Herbert Hoover and Theodore Roosevelt.

With the advent of advent of phone and radio the election saw unprecedented level of publicity. It was also the first election Women could vote. The book covers the suffrage movement and provides some interesting information on people and events leading up to the passage of the 19th amendment. This book also discusses significant also rans from 1920 like William Jennings Bryon, Al Smith and Socialist Eugene Debs.

David Pietrusza is a 20th century historian. He produced a critically acclaimed presidential electoral history trilogy of which 1920 was the first. The trilogy also includes 1948 and 1960. I thoroughly enjoyed this book. Pietrusza is a gifted wordsmith who's penned well paced, highly accessible popular history. The book is well written and well researched except for a few small editing errors such as writing 16th amendment instead of 19th amendment. If you like history you will enjoy this book.

It was good to listen to this during the 2016 presidential campaign. People think things are so bad now but they've been bad (could say worse) in before.

This book would be awesome if someone needed to do research on voting details of various pre-election and election materials. The information on all the Presidents was great and I found their personal histories fascinating. Just got a bit dry around election types of details, but otherwise a book for a historian.

Gives a pretty good back story to each of the "six presidents" with enough filled in details to satisfy this history buff. It took me a while to get used to the narrator's delivery as I found it choppy and slightly reminiscent Bob and Ray's routine of "slow-talkers-of-America" but faster.

Everything I Wanted and More

This book was so informative, fascinating, and everything I wanted and more about the era and the political landscape. I give it the highest of recommendations.