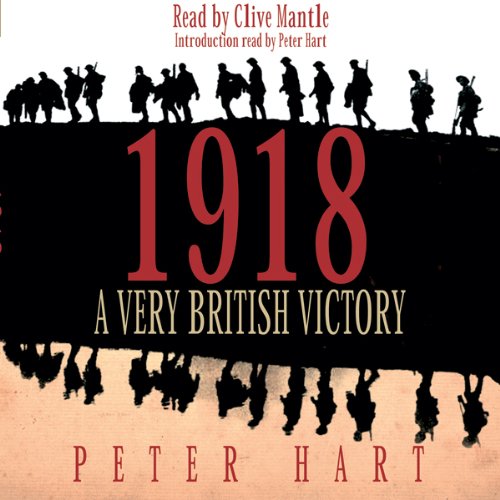 In every sense, 1918 was the climactic year of the Great War on the Western Front. The battles fought during that spring dwarfed those at the Somme and at Passchendaele.The casualties on both sides were unprecedented, and the weapons and tactics used were the culmination of four years' bloody experience.

This epic account of the events of 1918 is the first major reappraisal of the end of the war for more than 20 years, and describes what is in some respects a forgotten chapter in history. The soldiers who returned to Britain in November 1918 were not the martyrs or victims of popular memory - they were a victorious army and were greeted as heroes.

As the oral historian at the Imperial War Museum, Peter Hart has had unprecedented access to material never before seen or heard. He uses this vast wealth of sources to describe the entire course of the year, at all levels of command, from the terrifying German attacks in the spring to the victorious parades after the Armistice was signed. As a chronicle of the Great War's brutal climax it is unparalleled in its scope and depth.

What listeners say about 1918

1918: a one sided twisting of history

The worst piece of world one history I've read to date.
The author seems to be extremely blinded by the propaganda of the time, dismissing any counter argument. Painfully concentrated on the western front (the other fronts were meaningless sideshows according to the author) and British war effort (Americans didn't do a lot, French were merely following the British...)

On top of that, the narration - by the author - where he tried to emulate a German, or French accent in English are, plainly laughable and insulting.

If you want a good, interesting, and balanced account of the western front in ww1, listen to Dan Carlin's modcasts. They do the job way better.

Interesting take on 1918 focusing on the British Army. This in my view, gives a somewhat narrow view and overplays the part Britain played. Hart also stoutly defends Haig again in my view, giving the reader an unbalanced account of this most debated soldier. I would say there are better, more balanced accounts of 1918 .

Peter Hart has written a masterpiece, this book explains in graphic detail how the German army on the western front was not defeated by a stab in the back, but was defeated by the British army which had learnt the hard lessons of the Somme and Ypres and which was well lead and supplied. The German army was defeated on the battlefield fair and square by the best troops in the world who deserve our utmost admiration and praise.

The Great War was a charnel house, but the Blackadder vision of heartless, upper-class officers marching naive volunteers into gunfire at walking pace is far from the truth. 1918 tells the often forgotten story of British and Empire forces holding back Germany's mighty spring offensive in the last year of the war, and then countering with a stunning series of victories which mark Britain's highest point as a land power.

Everybody in Britain should be made to listen to this book, which movingly describes the incredible victory achieved by the allies in 1918. It is beautifully performed and listening to it was a thoroughly moving experience.

A very interesting look at the campaigns of 1918. From the entry of USA until the final victory.

Really enjoyed this and also it alters the balance of competance and stupidity of the Generals. Calls into question the actions of Lloyd George . Well worth a listen