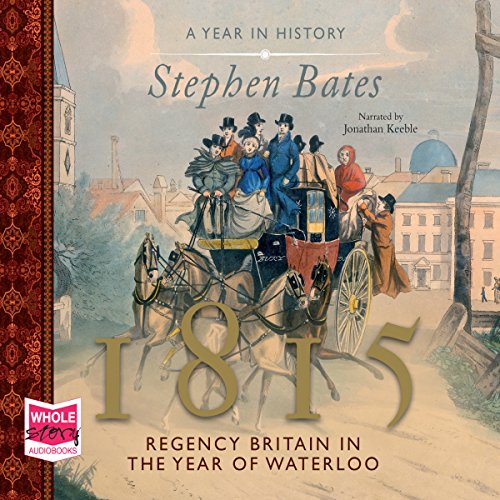 1815: Regency Britain in the Year of Waterloo

1815: Regency Britain in the Year of Waterloo

The year 1815 was the year of Waterloo, the British victory that ended Napoleon's European ambitions and ushered in a century largely of peace for Britain. But what sort of country were Wellington's troops fighting for? And what kind of society did they return to?

Overseas, the bounds of empire were expanding while at home the population endured the chill of economic recession.

What listeners say about 1815: Regency Britain in the Year of Waterloo

this, in my opinion, is a "must read" for fans of jane austen's novels. it places her work in a historical context, as well as pointing out and clarifying many of the social and political niceties that jane austen's contemporaries would just automatically have known, but modern readers might be missing. i had frankly expected-- and was willing to be-- a bit bored by the parts of the book that pertain to the battle of waterloo, but stephen bates' prose walks the line quite brilliantly between historical accuracy and pure human interest... with some really fun bits of gossip and intrigue slipped in as well. jonathan keeble voices the whole thing perfectly. i'm sure i'll listen to this again!