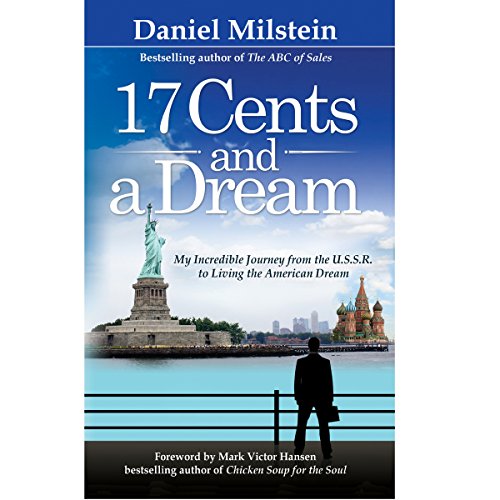 17 Cents and a Dream

Mark Victor Hansen, best-selling author of Chicken Soup for the Soul says this about 17 Cents and a Dream: "Through pure determination, fortitude and attitude, Daniel pulled out of impossibly difficult situations. His story is true, his story is a personal inspiration to me and I hope it will inspire you too to maximize your potential and go for the greatest of dreams."

On a cold December night in 1991, a young boy with 17 cents in his pocket first set foot in the United States. Twenty years later that young man found himself the founder and CEO of a billion-dollar corporation. Daniel Milstein's harrowing story about how his mother, father and brother escaped the oppressive government of the USSR and immigrated to the United States and carved out a life for themselves has been described as the quintessential immigrant story of the era. Born in Kiev, Ukraine, Daniel and his family experienced undue hardship, religious persecution, and life-and-death situations all in the shadows of the greatest nuclear accident that ever occurred: the Chernobyl nuclear meltdown, which killed more than 100,000 people, including his grandfather. Now, as an Inc 500 CEO, Daniel has just finished a new book detailing his story: 17 Cents and a Dream: My Incredible Journey from the U.S.S.R. to Living the American Dream.

What listeners say about 17 Cents and a Dream

It's been a while since I've read a book so inspiring. I believe some books are motivational and some are inspiring. The difference between motivation and inspiration is that motivation fades away with time but inspiration stays with you forever. I will forever remember the lessons in this book and try to apply them. I highly recommend this book to anyone in business or generally trying to make something of themselves.