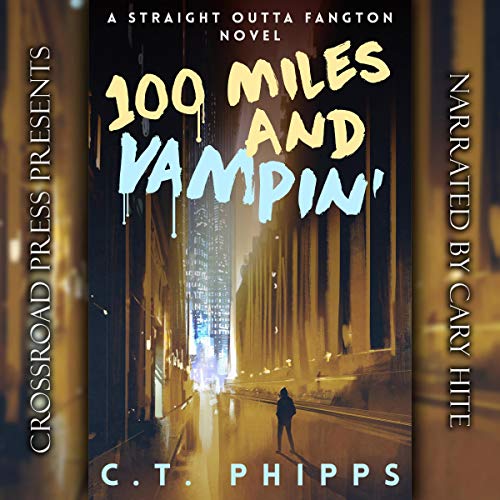 From the Best-Selling Author of the Supervillainy Saga

Peter Stone is a poor black vampire who has found undeath isn't all it was promised to be. There's no vast riches, innate cool, or super-sex appeal. No, instead, there's working the graveyard shift at a gas station alongside the highway to Detroit. Oh, and the blood thing sucks, too.

Working a second job as the sheriff of the undead, Peter is asked to serve as bodyguard to a famous vampire romance novelist visiting the city. He doesn't go 24 hours before she's dead and he's the primary suspect. There's also evidence it was one of the most powerful vampires in the world.

Some days just hit you like a stake through the heart.

Set in the same world as the Bright Falls Mysteries.

"A fangtastic sequel!" (The Bookwyrm Speaks)

What listeners say about 100 Miles and Vampin'

I really enjoyed this book and the previous one. The author did a fantastic job and kept it kind of light. The narrator was amazing and I can’t wait for the next in the series to come out. Don’t take so long next time Phipps…we want the next book!

Anyone that needs a break from the usual vampires series need to give C.T Phipps a read/ listen..

not as good as the last one, but still good

Phipps has always had a writing style that I have enjoyed. Lots of fun sci fi quotes and pop references, and just an entertaining way of telling stories that doesn't take itself to serious. This one was less slap stick and I would say even better than his other stuff. If you have enjoyed anything Phipps has done so far, You will probably love this.

If you're wondering the comparison take a listen to Book 2. Stone once again having more responsibility and zero raise is back in an action packed sequel. The puns are fantastic, with nerdy quotes intact. The narrator brings even Hell to life and color. Gotta listen to find out how. No dissapointment here a total laugh a minute while being awesome.

Back in the world of Peter Stone, a poor black vampire who still works at a convenience store. He is also the belladix, aka vampire sheriff, of New Detroit. However, the second job doesn’t come with a salary, hence why he has to keep the first job. Thoth, Peter’s creator and the second most powerful vampire in New Detroit and husband to the voivode, vampire regional leader, Ashura (though, marriage is a pretty loose thing with vampires) has offered Peter a really high paying job of playing bodyguard to fairly young vampire and novelist, Rebecca Plum (think Stephenie Meyer or Anne Rice). The problem is that Rebecca Plum might write best selling novels, but she’s also really bad vampire in that she enjoys killing humans, which doesn’t sit well with Peter. Things aren’t as easy as they should be, of course. Things go arigh and everyone ends in a battle that will change everything. I won’t go into more detail on that. This is a fun story in a Phipps style of a lot of great humor and snide comments from the characters. Oh, and the large number of pop culture references that are featured in every C.T. Phipps story. The Straight Outta Fangton series is also set in the same world as Jane Doe the weredeer in the Bright Falls Mysteries series, though she lives in a different part of Michigan. There are some character crossover, but you can read either series without having read the other. I have to say I love David, Peter’s best friend. He is a favorite character of mine. He has some of the best jokes in the story. I can’t say too much about David without spoiling things in Straight Out of Fangton or 100 Miles and Vampin’, but just know that David is a great character. Narration Cary Hite is back as the narrator for this series. I’ve really enjoyed his narration of this series. I think I like the voice of Thoth the best. Not only is Thoth a very powerful vampire, but he is also a Haitian voodoo priest and I love the accent that he uses.I can’t imagine anyone else as the voice of Peter and the gang. **I received a free copy of this book and voluntarily chose to review it.

Loved the characters, the place of the story, the many, many references and a whole bunch of distractions that were added to the story. Very entertaining, and an enjoyable vampire / paranormal based world and story to listen to.

7-7-19 re-read audible version 4 stars 100 Miles and Vampin' Straight Outta Fangton, Book 2 By: C. T. Phipps Narrated by: Cary Hire This audible book is a book I requested and the review is voluntary. I have read this book before and loved it but wanted to heat it professionally performed. It was great! It shows how lazy I get it now forgetful since I read it last. It still has all the action, hilarious fun, creatures, crazy plot, unpredictable situations, clever and witty dialogue, and solutions to problems in the most unusual ways! Very funny book! The narrator performed this book terrific!

The right amount of snark

Note: This is Book 2 in the series and works best if you read Book 1 first. However, it’s not strictly necessary to enjoy this story. Book 1 was fun but sometimes relied too much on snark and geek references. Book 2 is most excellent and manages to keep the right amount of snark & nerd culture references while also telling an engaging story. This is the tale that really made vampire Peter Stone work for me. While I have enjoyed many Phipps books, initially this series was ranked the last in my enjoyment when just considering Book 1. Book 2 launches it up to top 3 of Phipps’s series, I liked it so much. The characters have more depth and I felt they had a greater purpose in this book. The stakes were higher, so I actually worried we would lose someone. And we do. I won’t say who, but that loss made the story better in that I now worry about my favorite character, not wanting to say goodbye to them. Peter’s role in Detroit grows in responsibility with this story. I liked that he got stuck on bodyguard duty for a spoiled vampire, author Rebecca Plum. It was bound to go wrong. The addition of the fox lady Yuki was excellent. Then there’s the very powerful demon Gog (who makes an excellent bad guy in this tale). Peter has his hands full! In short, it was a lot of fun & sets the series up for something bigger in the next book. 5/5 stars. The Narration: Cary Hite gave an excellent performance. He’s perfect for Peter Stone, capturing his humor well. I also like his ancient, kinda spooky voice for Thoth (Peter’s maker). Hite gave a credible performance for the lady voices and I liked his accent for Yuki. The pacing was perfect & there were no technical issues with this recording. 5/5 stars. I received a free copy of this book in exchange for review. My opinions are solely my own.

I started and finished this in about a day and a half because I couldn’t put it down. I read a lot of Phipps’ novels and a lot of them take place in these awesome alternate realities or futures. This world is my second favorite (and technically it’s the same world as my first). I love the world that he created in the Bright Falls Mysteries series – and this is just down the road – less than 100 miles away in Detroit. 100 Miles and Vampin’ was a kick-ass (I need to remember to remove this for my Amazon review) second novel in the Straight Outta Fangton series. We’re thrown right back into the same world with the same characters again. Only this time they’re set to protect a vampire novelist. That’s where things go awry (and very quickly). Just like Phipps’ other books both in and out of this series – it is full of smart comments, sass, real-world references, lots of nerdiness, and antiheroes. There was even a line where he talked about how his creator is a “bad guy who kills other bad guys” which made me think of the Supervillainy series instantly. I can’t talk too much about the plot but just know that you’re in for both funny and enjoyable book. Phipps is able to write a book that I laughed at but also really wanted to know what was going to happen in the end. Overall, 100 Miles and Vampin’ easily falls into one of my favorite of Phipps’ books and I’m super excited that there will be more books in this series (at least one more if the epilogue isn’t lying). Also, I won’t fully ruin who or where, but a suprise Bright Falls guest shows up to the party near the end of the book. I want to talk about it – but it would be a major spoiler. Just know you’re in for some laughs as Stone tries to comprehend what’s going on and also makes fun of said person.

This time the stakes are higher. (sorry/not sorry)

Please excuse the pun, but it reflects the author's love of them, I think. This is the sequel to my favourite Vampire novel since the Vampire Lestat. Like book one, it's at once as dark as anything by Anne Rice and yet maintains a near constant pitch of humour. The setting is part of Phipps's "United States of Monsters" world which is a fascinating and original idea. In essence, vampires and other supernaturals have been "revealed" and are a *mostly* accepted part of society. The MC of this novel, like the first, is a vampire called Peter Stone. He is many things. Incredibly powerful vampire 'sheriff' of Detroit, convenience store worker, veteran with a conscience, total geek, and at heart a good man stuck being an evil monster and doing morally questionable things to save the world. All while wisecracking at a hundred miles an hour and making enough pop culture references it could make your head spin. For me, that all works fantastically well and this was a listen that kept me both gripped and chuckling throughout. Final word comes down to the narration. Cary Hite is brilliant and is perfectly cast as the voice of Peter but also his vampire creator Thoth, his friend (now zombie) David, and the other characters. He carries off every instance of Peter's biting wit (I think this pun thing is contagious...) with aplomb.