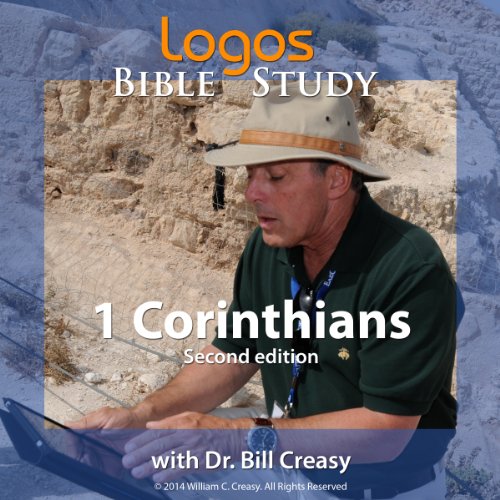 Dr. Bill Creasy of Logos Bible Study uses a literary, historical approach to examine and enliven the bible for modern listeners. Dr. Creasy draws on his studies, travels, and personal anecdotes to depict a vivid picture of the works of scripture. Somewhere between a sermon and a college lecture, he delivers these audiobooks with authority but a pleasantly friendly voice and a touch of fun, using contemporary references.

Here he discusses First Corinthians, the seventh book of the New Testament. He describes the context of Paul’s journeys and the church at the city of Corinth. Paul wrote his epistles to Corinth in order to address concerns he had with what he saw as problems with their church. This is an engaging lesson on Paul’s principles.

For Paul, Corinth was nothing but trouble. In the winter of A.D. 54, a delegation from Corinth arrives in Ephesus to meet with Paul. They inform Paul that the church in Corinth has (1) developed factions and divisions among the believers, and that (2) believers are suing one another in the secular courts, and that (3) rampant sexual immorality is spreading throughout the church. In 1 Corinthians Paul addresses each of these issues, and then in chapter seven, he goes on to address a series of questions presented to him in a letter delivered by the delegation. Paul’s responses are blunt and not particularly kind: he tells the people of Corinth to stop being such big babies and to “grow up”! Listen to Logos Bible Study’s Dr. Bill Creasy as he explores Paul’s response to a church rife with rebellion, division, immorality, and gross misuses of God’s gifts to his people.

What listeners say about 1 Corinthians

Learn WHY to Believe in our Resurrection, too.

Learn HOW we will become absent from the Body, yet Present in the Lord. Bill Creasy teaches it best !

Bill is the best way to kill your faith.

There are so many points I disagree with Bill. His opinions unfortunately outweigh his facts. His facts are informative but once I found other Bible teachers I can no longer tolerate his watered down opinions of biblical truth.

Every one should listen to this series!

I’ve been an audible listener for about 6 years. In that time I’ve listened to about 10 months of time. I
This series is absolutely wonderful. Highly recommend starting with Genesis.

I learned a lot about 1 Corinthians that I did not know. I look forward to listening to 2 Corinthians for sure.

Highly recommend! Our mens group uses these lectures for our Bible study. We started with John.

scathing rebuke to the Corinthians

It was interesting to find out that this epistle was really a scathing rebuke to the Corinthians. I'm glad to understand the background to the letter at it puts the letter in perspective. It also reminds us how Christians role in the family of God. Dr. Creasy pointed out the the "women shouldn't speak in church was specific to Corinthians" and there were women in leadership roles in other churches which paul didn't have a problem with.

Dr Bill Creasy at his best

Love the in depth exposition of the Epistle to Corinth. This audiobook is hghly recommended.

If you could sum up 1 Corinthians in three words, what would they be?

Dr Bill Greasy is very good on what he does and explains they history and why Paul wrote what he wrote.

Paul founded a church. You wont believe whats next

Sorry about the heading

This study goes into the church in Corinth...And it is great.
There are so many places where I have misread this chapter of the bible.

It turns out, Paul also had the super power of sass- or at least a strong sense of sarcasm and Irony when chewing people out.

Paul sends this letter to a young church (like 4 years old) and it is a serious slap in the face.
They respond with a letter which is unfortunately lost to the ages, Paul visits- probably with some stern words, - and then writes Second Corinth to smooth things over.

Dr Bill Creasy has a great personality and delivers with flying colors as usual! He makes it very enjoyable to listen to :)