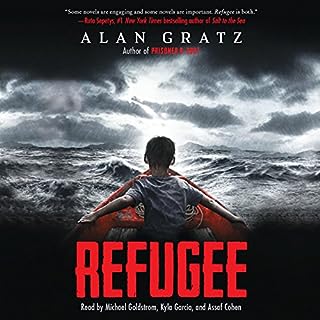 This timely and powerful novel tells the story of three different children seeking refuge. Josef is a Jewish boy living in 1930s Nazi Germany. With the threat of concentration camps looming, he and his family board a ship bound for the other side of the world. Isabel is a Cuban girl in 1994. With riots and unrest plaguing her country, she and her family set out on a raft, hoping to find safety in America. Mahmoud is a Syrian boy in 2015. With his homeland torn apart by violence and destruction, he and his family begin a long trek toward Europe.

Great read, even for adults

While Alan Gratz teaches and writes for children, Refugee is one of those books everyone should read to learn about the old and new humanitarian issues around the world. The structure of the book is awesome, as it skips between the narrators every chapter, tying all their experiences together in a historical timeline. Some powerful quotes were performed wonderfully. Overall a great audio book for all ages.