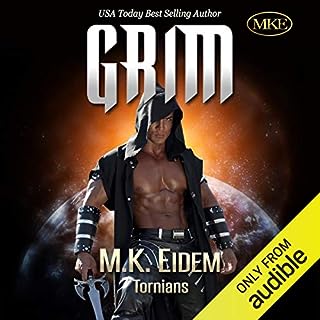 The story is true but the audiobook is a mixed bag

Would you listen to Grim again? Why?

I would listen to Grim again because M.K. Eidem's novel is engaging. I'd also listen to it again just to hear Commodore James' raspy Grim impersonation.

Although Grim and Lisa's relationship progressed really quickly early on, the author was able to grow their understanding of each other through their interactions and misunderstandings.

Have you listened to any of Commodore James and Laura Jennings ’s other performances? How does this one compare?

I've never listened to either Commodore James or Laura Jennings' other performances. Commodore James has a really lovely cadence to his narration that feels very un-rushed. He also does the Grim and Wray voices very well but unfortunately for every other male character sounds whiny or as though they have either a speech impediment or a learning disability. Laura Jennings is a talent but her casting was wrong for Lisa's character since her voice has a shaky quality that was really distracting and sounded really elderly.

I would listen to it all in one setting for the narration and Grim's parts alone.

Honestly when I first heard Lisa, I thought she was an old woman. In the novel, Lisa is only 24 years old but Laura Jennings makes her sound like an 80 year old woman. A complete turn off. 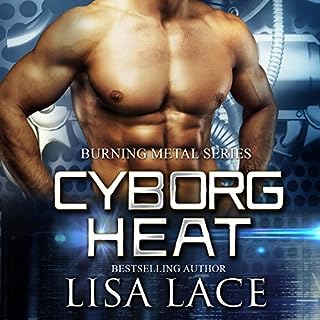 Amanda is a scientist for the military's cyborg program. Programming and repairing once-human soldiers is a lot easier than trying to date, so she buries herself in her work. She'll never admit that the cyborgs often seem like more than machines to her - especially the handsome AD-214.

Do yourself a favour and read the book instead

What would have made Cyborg Heat better?

Cyborg heat was great but could've been better with a more believable ending. The solution seemed a little too convenient and uninspired... a deus ex machina of sorts.

I liked the heroine best. Don't remember her name, but she was smart and spunky.

Would you be willing to try another one of Michael Pauley’s performances?

Never. Nothing will ever be able to compel me to ever listen to another Michael Pauley recorded audiobook. He was terrible. Nails on a chalkboard terrible. He succeeded in making the heroine, who happened to be a smart and hot scientist, sound like a breathy airhead. He should be banned from narrating women.

If you could play editor, what scene or scenes would you have cut from Cyborg Heat?

Don't bother with the audiobook. The story is promising and I'd definitely look into other books in this series but the narration is a letdown.