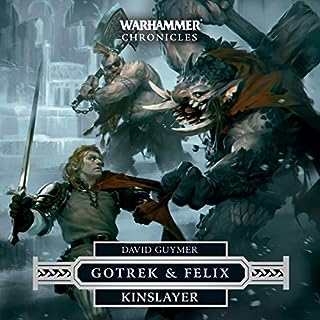 Gotrek and Felix: unsung heroes of the Empire, or nothing more than common thieves and murderers? The truth perhaps lies somewhere in between and depends entirely upon whom you ask.... Once companions on the greatest of adventures, Gotrek and Felix have long since gone their separate ways. Felix, married and settled, secretly craves the excitement of his youth. And when the opportunity arises, Felix embarks upon what might be his final journey. As the chaos of the End Times engulfs Kislev, Gotrek and Felix are reunited, battling the hordes of the Troll King alongside Ulrika, Snorri and Max.

makes you really not want to live in the End Times