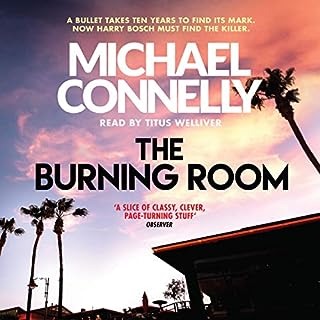 In the LAPD's Open-Unsolved Unit, not many murder victims die almost a decade after the crime. So when a man succumbs to complications from being shot by a stray bullet nine years earlier, Bosch catches a case in which the body is still fresh, but any other evidence is virtually nonexistent. Now Bosch and his new partner, rookie Detective Lucia Soto, are tasked with solving what turns out to be a highly charged, politically sensitive case.

This is the first audio book I've ever listened to and it's been a difficult benchmark for others to beat.... the most recent book I downloaded was another Harry Bosch one with Titus Welliver as the narrator because I enjoyed this one so much!

Michael Connelly creates the perfect balance between character development and the storyline.

I would have though that I would only listen to audio books whilst on the go, but I listened to this one while I was in bed too because I couldn't wait for the next part!