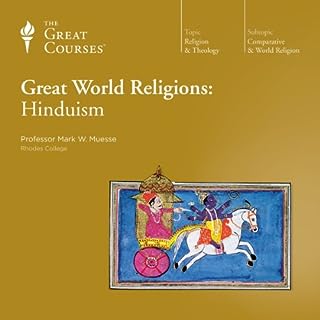 In this 12-lecture series, you'll encounter a religion that is perhaps the most diverse of all; one that worships more gods and goddesses than any other, and one that rejects the notion that there is only one path to the divine. These lectures provide a window into the roots of, perhaps, all religions. You'll explore the course of Hinduism's 5,000-year journey.

When I started this series I knew virtually nothing about Hinduism. After 12 lectures, I still don't feel like I know very much. Maybe this is due to the nature of the religion, which is incredibly diverse, or maybe the lecturer waffles too much. I'm not sure. He says during the lectures that to understand Hinduism you really need to see, smell and even taste it, and I think that may be true. A religion like Hinduism, with it's heavy emphasis on shrines and visually-represented gods, may be too hard to understand without some images. I also found the delivery a bit off putting because the professor has a broad, regional American accent, although at least he is very clear.

This book is not as profound as people seem to think. The book is good when it deals with the scientific and anthropological realm that is outside the author's area of specialty (which is history). It gets a lot weaker from the point where civilisation starts. Often I found the writer was just stringing together obvious, simplistic statements. When you combine this with a pretentious-sounding narrator it gets annoying. I would recommend the Great Courses series Big History: The Big Bang, Life on Earth and the Rise of Humanity by Professor David Christian as an alternative. It covers similar ground but is better organised, covers more time, and is more profound.

This is a very interesting book. Well written and narrated. It generated an ongoing interest in Elon Musk and his works. 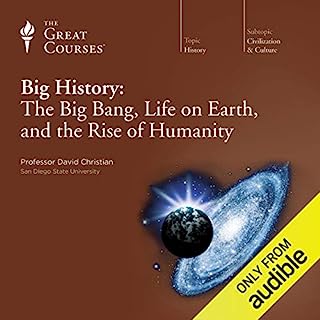 How is it possible for the disciplines of cosmology, geology, anthropology, biology, and history to fit together? These 48 lectures answer that question by weaving a single story from accounts of the past developed by a variety of scholarly disciplines. The result is a story stretching from the origins of the universe to the present day and beyond, in which human history is seen as part of the history of our Earth and biosphere, and the Earth's history, in turn, is seen as part of the history of the universe.

This course changed my view of the world and made it interesting again. In a media landscape dominated by trivia, scare mongering and conflict, to step back and consider the history of the universe and our place in it was incredibly stimulating. It definitely encouraged me to think outside my own cultural box and regard myself more as a member of the broader human race. Taking the longer view, it is a very positive story. It was also refreshing, in this era of poor quality and agenda driven communication, to listen to a genuine intellectual who has put a lot of thought into teaching us clearly and honestly. This course has really stimulated my interest in science and the history of other civilisations and I thoroughly recommend it.