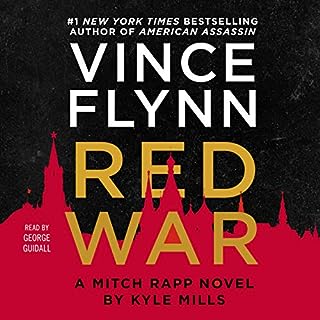 When Max Krupin - Russia's leader - discovers that his kidney cancer has spread to his brain, he's determined to hide his diagnosis. He begins by getting rid of anyone threatening to him - as well as creating chaos in the region to keep the world's attention diverted. Soon, Krupin's illness becomes serious enough that he needs a more dramatic diversion, prompting him to invade the Baltics. Desperate to understand what's causing Krupin's unusually erratic behavior and Russia's aggressive moves in the region, America begins working with Russia's disgraced prime minister to stage a coup.

intricate and well laid out.

Being a big fan of Vince Flynn's i was always worried when Mills took over that the books would lose their pace and intrigue, fortunately this was not the case and the series just keeps getting better. P.S. Guidall should be doing every book in this series, his voice brings the characters life and depth.