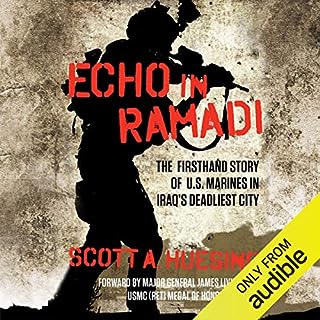 From the winter of 2006 through the spring of 2007, 250 marines from Echo Company, Second Battalion, Fourth Marine Regiment, fought daily in the dangerous, dense city streets of Ramadi, Iraq, during the Multi-National Forces Surge ordered by President George W. Bush. The marines' mission: to kill or capture anti-Iraqi forces. Their experience: like being in hell. Now Major Scott A. Huesing, the commander who led Echo Company through Ramadi, takes listeners back to the streets of Ramadi in a visceral, gripping portrayal of modern urban combat.

Difficult to get through

The alpha posturing detracted from what was probably a good true story. Disappointed with the purchase