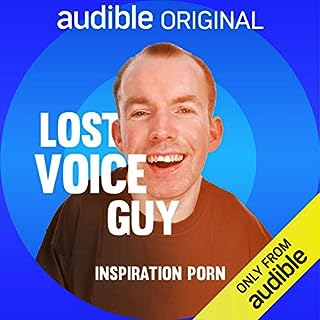 Winner of Britain’s Got Talent and the BBC New Comedy Awards, with his own sitcom and book deal under his belt... Lost Voice Guy’s career has gone stratospheric. Lost Voice Guy – aka Lee Ridley – has a form of cerebral palsy which leaves him unable to speak, but he now performs to sold out crowds using his voice synthesizer app. This set, recorded at the Edinburgh Comedy Festival, is one of his most honest, open and hilarious to date. Lee takes on subjects including the perception of disability in the media, government cuts, and the painful reality of dating and love. This podcast includes an interview with Lee by legendary comedian - and close friend - Ross Noble. Fun fact: the pair first met after Lee challenged him on who could do the best impersonation of Stephen Hawking....

BROKEN RECORDING! This comedian is very funny, so it's a shame that I can't listen to him!

1 of 6 people found this review helpful