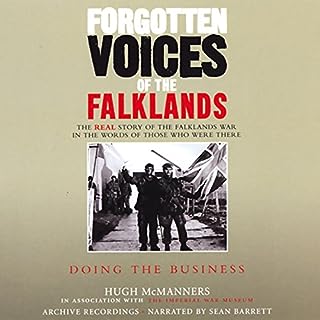 In April 1982, Argentina surprised the world by invading the Falkland Islands in the Atlantic Ocean. The tiny islands had long been the subject of a fierce territorial dispute between Argentina and the UK, and the occupation quickly escalated into a terrifying full-blown conflict between the two countries. This is a record of the defeat of the Argentines in a series of engagements the names of which have become legendary - Goose Green, Two Sisters, Mount - and ends with the liberation of Port Stanley itself.

eton educated captains, majors and Generals telling the story of how they played at war. if i hear " one told the boys to go forward" again i would throw my phone out. Sean Barrett is brilliant and he should have narrated the whole thing.