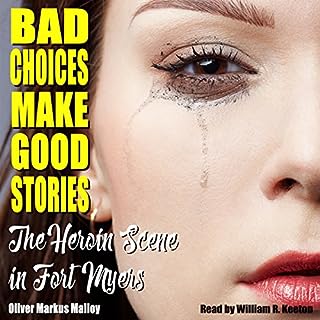 A raw, uncensored, and brutally honest glimpse into the crazy lives of drug-addicted prostitutes. Shocking, heart-breaking, and mesmerizing. Once you start listening, you won't be able to stop. Oliver moves from New York to Florida. Battling with depression, he gets sucked into the seedy underworld of Fort Myers, where he encounters a number of female drug addicts. He empathizes with them because of his own traumatic past. Oliver feels compelled to try to help them escape the addict lifestyle, but he soon finds out he is in way over his head.

A repetitive story about someone who never learns from his mistakes. Unfortunately I struggled to continue listening to his complaining about others actions when it could be predicted 100% before it happened. It may be interesting to individuals that have no idea about the lengths some addicts will go to.