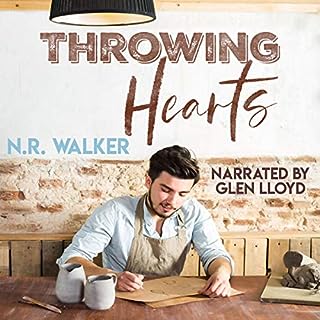 A fun and sexy romance where the kiln isn't the only thing that's scorching hot. Leo Secombe loves his life, and he's convinced himself he's happy to be single. In his spare time, he keeps himself busy at a local LGBTQ centre that pairs a younger person with a community elder to help them feel included in today's rainbow family. Leo and Clyde have been buddies for a few years now, and signing up for a pottery class seems like fun. Merrick Bowman has been so focused on getting his pottery business up and running that he's forgotten how to date. How to live, even.

This is such a sweet and adorable story! Leo is the best character – with a fantastic best friend and grumpy mate he catches up with weekly as part of an LGBTQI+ group.  It’s during one of these groups’ activities where he attends a pottery class and meets Merrick – our second fantastic character and all round nice guy! Sparks are instant and wonderful and I just adore the sweet mood this book put me in as I read it.  The side story of Clyde (the grumpy mate) and Merrick’s uncle makes this book even more special and one you just have to read!  If I had to use one word for this book – it’s Adorable! Glen Lloyd does a wonderful job bringing these characters to life! His portrayal of Leo is particularly perfect! 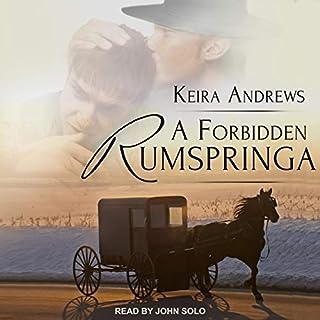 In a world where every detail of life - down to the width of a hat brim - is dictated by God and the all-powerful rules of the community, two men dare to imagine a different way. At 18, Isaac Byler knows little outside the strict Amish settlement of Zebulon, Minnesota, where there is no rumspringa for exploration beyond the boundaries of their insular world. Isaac knows he'll have to officially join the church and find a wife before too long, but he yearns for something else - something he can't name.

I’ve never tried an Amish romance before but picked this one up on sale and grabbed the audio to listen. A different kind of Forbidden romance but very enjoyable and I love the main characters of Issac and David. The challenges faced by them coming to terms with being gay and discovering each other is brilliantly written and passionately told by John Solo. 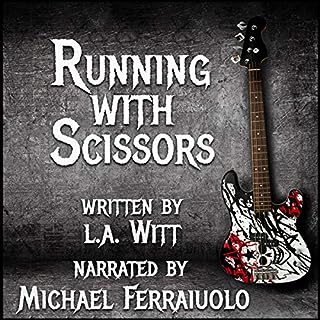 Eighteen months ago, drummer Jude Colburn made the biggest mistake of his life when he walked away from his band just as they were on the brink of success. Now, he’s got a second chance. The band’s bassist just quit, and Jude plays bass almost as well as he plays drums. The other band members aren’t thrilled, but they are desperate. Running with Scissors needs him, but there’s one condition: no hooking up with bandmates. That’s what ruined things 18 months ago, after all. Jude’s on board, but no one warned him about the drummer who replaced him.

Very much enjoyed the story of this band and the heat factor of the main characters is fantastic.  Brilliant audio by Michael Ferraiuolo – as always. 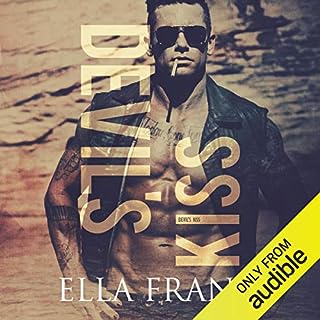 Derek Pearson likes to think he's an easygoing guy. Uncomplicated, upfront, and unapologetic with what he wants. His what you see is what you get attitude is on prominent display for anyone who cares to look, and his foul mouth is right there to back it up should you miss the point. However, what you see isn't always what you get, and only a select few have ever glimpsed the real man under the brash exterior.

A long journey to a perfect match

If you enjoy reading the long journey of two men you're not sure are gonna make it (but they do) - this is for you! Jordan and Derek are not the obvious match but their chemistry can't be denied. They take a very long time to figure their way through but it makes for an interesting and engaging read. The audio is well done and I really enjoyed Charlie's depiction of both characters. 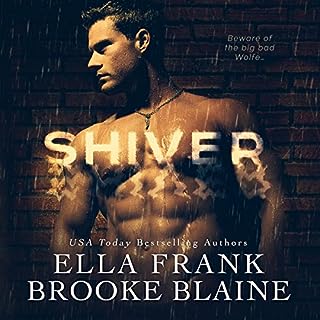 Wide-eyed and innocent, you stumbled into my world, never knowing the danger that lurked within. The Wolfe’s Den is no place for a little lamb, but you came anyway, and from the moment you stepped inside, you were mine. In my life there are no happy accidents. Every move is carefully orchestrated. Every situation premeditated. That’s what makes the hunt so intoxicating. What you need, I become. What you crave, I will give. Except the one thing you desire above all else - love.

If you enjoy books that make you gasp because the MC totally said that or went there when you didn't they could or would - you'll love this one. Salvatore Wolf gets what he wants. And he wants the little lamb he just found who wandered into his kink club. So he does everything he can to get him - anything... Jesse is innocent and has no experience with a man like Salvatore. But he's only human and Salvatore is HOT. He easily fall for the exciting and mysterious man until he wonders how he got in so deep. I'll warn you - this book will leave you salivating for more: but there is no more. This is it. It's hot, kinky and not enough - but completely worth it. The Audio does the writing justice also and is worth getting. 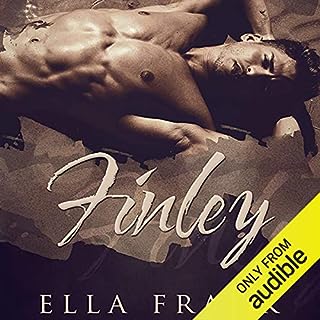 It's been seven years since Daniel Finley left his hometown in Florida for the hustle and bustle of Chicago's city life. Since then, he's worked hard for his position at the prestigious law firm Leighton & Associates, even when it's caused distance and isolation from his family and friends. But that's all about to change.

When your professor is that hot, who can blame you for pursuing him? A sexy story of forbidden love and the angst of letting it go - when you think that's what's best for the one you love. I promise there's a HEA and these two are just beautiful when they get their HEA. They just need to go through some turbulent times first. But isn't make up sex the best?? The Audio is well done also and worth listening to. 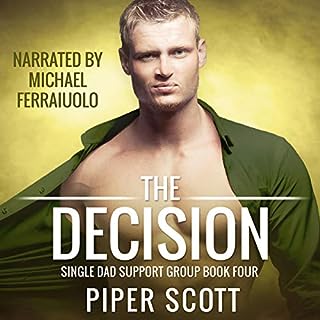 Former SEAL-turned-bodyguard Harlow isn’t prepared to have love smash face-first into his fist after one of the worst days of his life...or for it arrive in such a cute package. For seven lonely years following the loss of his husband, he’s been too wrapped up in raising his teenage daughter to think about a relationship, much less with an employee young enough to be his son.

think Simon and Harlow have the longest road of all the Single Dads and their story feels the deepest to me personally.  I just adore Simon and his family dynamics and the development of the Single Dads and a friendship group really gets momentum in this book. This is NOT a standalone – you really have to read these in order but they are some of the best books in the genre and you will not regret it.  Brilliantly written and magnificently engaging – the characters feel like your own best friends and the laughs and tears are real. Michael Ferraiuolo’s narration brings our boys to life in new ways.  I love his portrayal of Harlow particularly – both the written and audio versions are highly recommended. 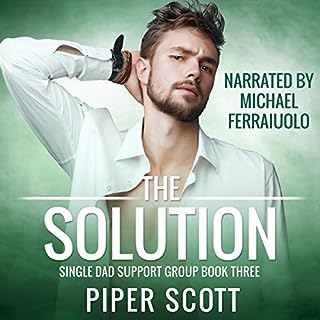 Vincent’s past threatens to overthrow his future. The solution? He’s about to find it in the storage closet at his friend’s wedding. All single dad Vincent is expecting from his friend’s wedding is a good time...not an irresistible older omega named Mal who slips into his heart as quickly as he slips into his bed. With a job relocation to the city on the horizon, a relationship isn’t off the table, but there’s a catch. There’s something about Vincent’s past his prospective lover needs to know - something he’d rather leave behind.

best and hottest meet-cute ever!

The best meet-cute you could ever imagine (in the Mpreg world) happens in this book. An omega in heat, hiding in a broom closet with a vibrator… a lost Alpha looking for the bathroom… *bites knuckle*.  Vincent is the sweetest Alpha and is the perfect match to our delicate Mal. The underlying threads of this story are so special and subtle that it makes the story unique and beautiful – and this book has a very special place in my heart because of it.  Michael Ferraiuolo does a magnificent job (as always) to bring these wonderful characters to life in the audio and both written and audio is highly recommended.  If you never read another Mpreg series – read this one! 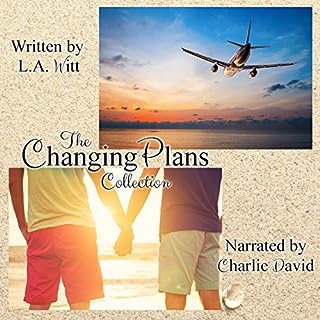 After being stood up at the altar, compulsive over-planner Elliott Chandler decides to turn his honeymoon on Oahu into a vacation for one. Fate puts a hitch in his plans, however, when the airport is snowed in and his flight is delayed. In the terminal, the jilted groom catches the eye of another stranded traveler: the laid back and very sexy Derek Windsor. Derek breaks the ice and strikes up a conversation, and as the temperature drops outside, the heat between them rises.

A sweet and sexy story of two men who didn’t mean to fall in love but who seemed to have fate play a part in bringing them together when their plane was delayed at the airport. Charlie David’s narration of the audio was a great addition to LA Witt’s writing and it was a pleasurable way to spend 8 hours! 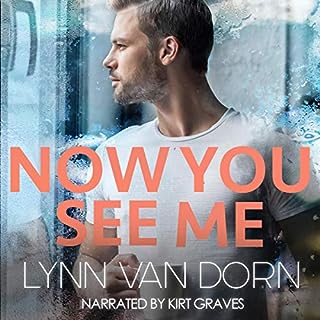 Miguel wants to be noticed. Miguel Cordero Ruiz always considered himself straight, but his sexy anatomy professor, Dr. Cummings, is making him seriously rethink that. While the professor who lives across the street is supposedly a “bird watcher”, it's rumored he’s really spying on the male students who live in Miguel's building. When rumor is confirmed as fact, Miguel decides to give the professor a show he won’t forget. Aldrich is afraid of being seen.

Made me laugh, gasp and swoon!

Bold characters with unusual backgrounds make for a steamy and emotionally deep story. I was sucked in quickly and engaged strongly with this book. An intelligent read with clever dialogue made me swoon, laugh and gasp! The Audio narrated by Kirt Graves brings an extra bit of colour to the story with the perfect voice to Miguel and the descriptions jumping to life!