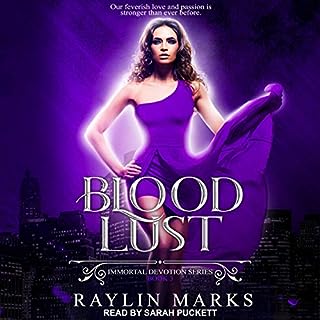 Their lust and love was strong enough to seal their bond, until dark magic worked its way into their lives. Elle will do anything for her four hot vampires, but now the game changes, and they're sacrificing to keep her lustful cravings under control. Once the Banners realize it is going to take more than a witch to reverse the dark magic looming over all of them, they're forced to go undercover to a vampire academy for answers from the one person who may have them. The Banners may be the strongest immortals alive, but one human is proving to be their greatest weakness.

Just a bit too far for me.

This one became just too ridiculous for me. I'm all for multiple partners and mateing bonds but I think in this story, with these characters, it just went a bit too far. I felt everything was just a bit too aver exaggerated. Couldn't finish it which is a shame because I really liked the start of this series. 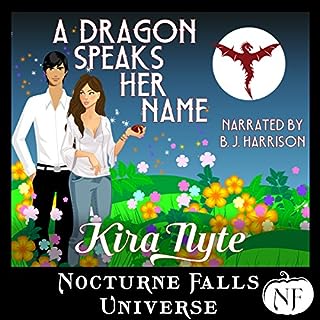 Kaylae Drayce is convinced she’s crazy. She hears voices in her head and dreams of fiery apocalyptic wars. That’s nothing compared to the terror she feels when the only people she loves are taken from her and she’s forced to run for her life all the way to Nocturne Falls. The town promises her one of two things: answers to her madness or a one-way ticket to an asylum.

Probably my favourite of the NFU series so far. The lore is only borderline different from the original series. The romance, while not in-depth, can still be considered an actual romance. And the plot has a few turns that kept me interested. I felt left hanging with the lack of closure with the bad guys but then remembered that Nyte has a follow up to this one. Something I'll be following up in the very near future. 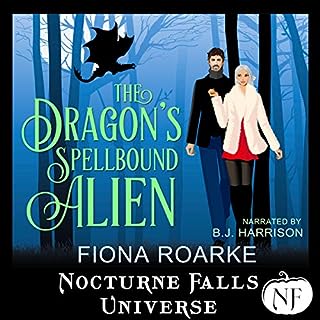 Bianca Forrester may be a mind-reading alien from Alpha-Prime, but she’s an Arkansas girl at heart who leaps at the chance to work as a psychic in Nocturne Falls. The Halloween-themed Georgia town is the perfect cover for werewolves, gargoyles and, lately, aliens looking to stay under the human radar. Not only will it be an adventure, it’s the perfect place to dodge her mother’s matrimony mania.  Half-human, half-dragon shifter Warrick Hart has never forgotten the fear and loathing he faced as a child, until they landed in the haven that is Nocturne Falls.

I promise I really did try but I just couldn't get there. **possible mild spoilers below**
I guessed what was possibly going on half way through, but the explanation at the ending was incredibly disappointing. I can think of much better ways this could have ended without it ending up a ridiculously exaggerated love at first sight cliche. Infact I honestly think the whole story would have made more sense is that was not how it ended up. Sure have the end up in love, that's what we're here for, but this was just silly.
Also disappointed in the divergence from the lore of the original series. There were MANY references, in MULTIPLE books, as to why half-vampires can't be a thing. In fact it's a HUGE point in the FIRST book! And no mention of a horde at any point left the dragon lore lacking too. 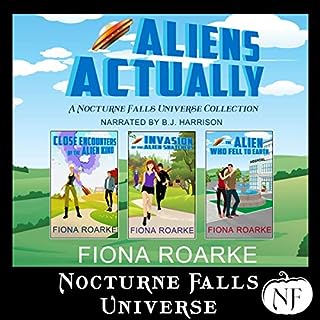 Pilot. Guard. Prisoner... Stowaway. All are crashed in the Georgia woods, lost on a world where aliens are the stuff of science fiction. And what if the locals are far from human themselves?

Good but not as good.

***** On Roarke's integration of her characters into Painters world. With familiar locations, details and characters(who were even mostly in-character) it really felt like part of the series.
** For Roarke's character depiction and development. While most of the characters had interesting backstories the uncanny habit for her characters to meet and suddenly be unable to look at their precarious situations with any logic or really just look at their life changing situations at all, instead of looking into the romantic interests eyes, was disappointing. Also the fact that all three main female characters basically become swooning damsels in the arms of their men despite all being described as skilled warriors more than once was even more disappointing.
The expansion and more complex story in the third book was a nice surprise and unfortunately probably the only reason I was able to get to the end.
If you liked the original series, I'd say there is a good chance you'd like these. But they definitely didn't leave me hungry for more at the end. 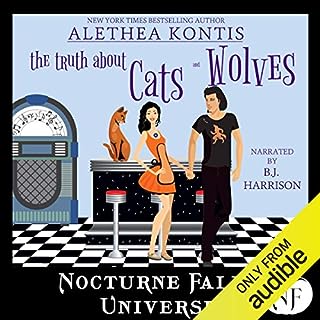 Like many paranormals of Greek descent, Kai Xanthopoulos will not know her true nature until her young powers fully manifest. Unlike her parents - and much to the dismay of her stray cat best friend - Kai has chosen not to spend the rest of her life at the diner in Nocturne Falls. She takes a job at Delaney's Delectables instead, a decision that puts her directly in the path of a fugitive werewolf that could change her destiny....

Cute and sweet for something so heavy.

Definitely in the flavour of the series. I was thrown when I realised that the characters were teenagers and I felt the story was a bit too heavy for that age, but it worked. A lot of sass and snark and I'm sorry there wasn't more of a three way with Owen but that probably would have been too progressive for this series. Also keen for more of a story with Owen, there's a lot open there.
Hank and Ivy's daughter was missing from this story too. Maybe that's a time line thing but it's not obvious so it could be something that was missed.
A wonderful continuation of Harrison's work that made the change in author not so obvious. 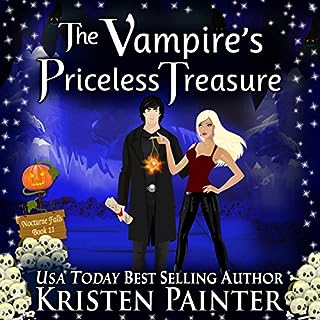 Half-reaper, half-vampire Kora Dupree has made big changes in her life. She’s on good terms with her previously estranged father and taken on all kinds of adult responsibilities. But when an opportunity to find out the truth about her late mother comes along, she can’t resist pursuing it. Even when it means returning to her somewhat dubious ways. Vampire Greyson Garrett knows the bad but beautiful Kora is up to something. He’s wise to her games. After all, her father has hired Greyson numerous times to save Kora from all the sticky situations she’s gotten herself into.

A paranormal romance adventure story. Not what I was expecting from this series.
I guessed to Fox was very early on so that was a bit of a let down, and the end was a but too sickly sweet (even for this series) but the relationship dynamic and the treasure hunt was wonderful. Like in the previous book, the relationship was much more natural than many of the others and Koras self development was quite endearing. 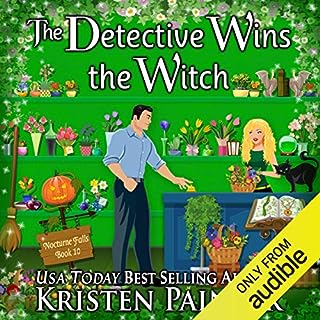 Private investigator Wyatt West finds his job a little tedious most days, but that changes when he meets a bewitching blonde florist who needs a favor in the way of a wedding date. There's definitely something magical about her, but little does he know just how correct that first impression is. Single mom Marigold Williams finds herself instantly attracted to Wyatt but doesn't dare tell this handsome human that she's a witch and things in Nocturne Falls are a little spookier than he suspects. He’s just a nice guy who’s offered to be her plus one.

That Last line!!! So much swag!!
This has been what felt to be the most naturally developed romance of this series. It's always irritated me a little how a lot of the relationships in this series ended with a marriage proposal after a week or less but there was always so much action that it felt longer so I could deal with it.
But this, while following a similar flow, was just so much more organic ...... I am only just now wondering if that's because of the nature of Marigolds green magic? 💐😘 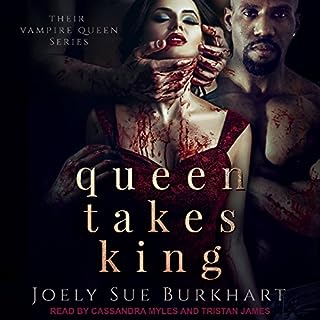 For the first time in her adult life, Shara has plenty of money thanks to the Isador legacy - and she's not alone. Daire and Rik are devoted lovers, but they know other Blood are coming. Blood who may challenge Rik for the coveted alpha spot at her back. As her power grows, so does her hunger. But without fangs, she fears she'll never be the queen her Blood expect. More Blood means power struggles and complications, and she has no idea how to keep everyone happy. Worse, her dreams are quickly becoming something to fear.

I was worried that the more people were added to her circle the more ridiculous this story would get(something I find in most harem stories) but really it's not. This is still as hot and wonderful as it was when there was only 3 of them. 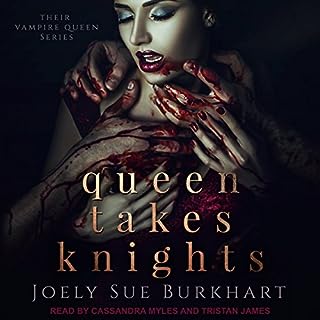 A lost virgin vampire queen. Two vampire knights sworn to protect her. It's about to get very hot... and bloody... Ever since her mother was murdered by monsters five years ago, Shara Isador has been on the run. Alone, scared, and exhausted, she's finally cornered in Eureka Springs, Arkansas. Out of hope with nowhere else to turn, she's ready to end it all when two men come to her rescue. They say she's a lost queen descended from Isis, and they're her Blood - vampire knights sworn to protect her. It all seems like a crazy nightmare, until the alpha offers his blood.

I'm relatively new to paranormal erotica but this is definitely more like what I was expecting - blood, fluid sexuality, darkness, magic and a monarchy to be brought into submission - Much better than the clean, watered down and romanticised things I've found so far.
As much as this is about the sex, I liked the flow of the plot. The heroine is pulled down a path that she grabs by the balls and makes sure it keeps going. She doesn't simply waft the way her men push her but neither does she fight to hold onto an old path that no longer makes sense.
I have no real issues with the narration but I think this series would have been better done by a single person. There is often an echoing quality to the voices at times too. But like I said, no real issue. 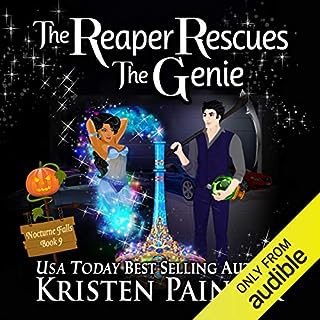 Welcome to Nocturne Falls, the town that celebrates Halloween 365 days a year. The tourists think it's all a show: the vampires, the werewolves, the witches, the occasional gargoyle flying through the sky. But the supernaturals populating the town know better. Living in Nocturne Falls means being yourself. Fangs, fur, and all. Death is what grim reaper Lucien Dupree knows best. Or rather, he did until his reaping powers became tragically unreliable. Now he’s living in a self-imposed exile to keep humanity safe. Sure, it’s a lonely existence, but it’s the best thing for everyone.

So much better than I was expecting!

It seems to be the running trend with this series that if I'm kind of lukewarm about the blurb I thoroughly enjoy the story and if I'm excited about the blurb I find the story lacking.
This is definitely the former!
The creative use of lore in these stories continues to entertain me. I'm glad there was an explanation about Korras origins too. I was bugging me for quite a while.