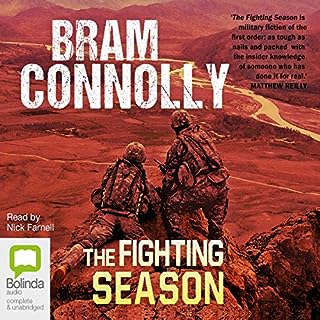 Outside the wire, Uruzghan Province, Afghanistan, 2010.... In the badlands of central Afghanistan, an Australian Special Forces platoon is fatally hit by a roadside bomb. A shadowy Taliban commander, codenamed 'Rapier', is identified as responsible for the deadly attack. Matt Rix, the ultra-tough commando who led the ambushed platoon, swears vengeance. Rix is one of Special Forces' most lethal operators. He'll neutralise Rapier - whatever it takes. But in Afghanistan's brutal war, not all things are as they seem.

Hard to turn off

Excellent narration by Nick Farnell of Bram Connolly’s amazing first book made it hard to turn off. With a story that has well rounded out characters and excellent action phases when Matt Rix and Yankee Platoon went outside the wire that truly held you on the edge of your seat; that was broken up by moments of the close mateship between the commandos that brought some chuckles with the mischief and jokes that Connolly has used.

Overall...this is one audiobook worth getting