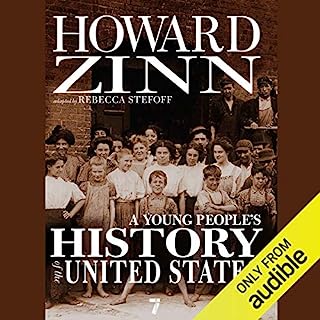 Beginning with a look at Christopher Columbus’s arrival through the eyes of the Arawak Indians, then leading the reader through the struggles for workers’ rights, women’s rights, and civil rights during the 19th and 20th centuries, and ending with the current protests against continued American imperialism, Zinn in the volumes of A Young People’s History of the United States presents a radical new way of understanding America’s history. In so doing, he reminds listeners that America’s true greatness is shaped by our dissident voices, not our military generals.

This is the truth that many of us seek. It needs to be heard! After years of studying the history of the USA in my own time, in my own way I am relieved and fulfilled as to finally have all the knowledge pertaining to the establishment of the US in one neat piece of literature.