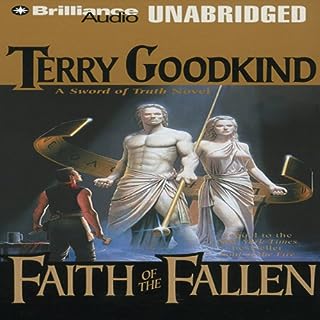 A Sister of the Dark captures Richard and takes him deep into the Old World, to the very heart of the Order, while his beloved Kahlan remains behind. Free because of Richard's sacrifice for her, but unwilling to abandon the cause of the Midlands, Kahlan violates not only prophecy but her last pledge to Richard and raises an army against the advancing horde of the Imperial Order.

In passages of this series you will come across inexplicablely inserted truisms of neoliberalism. You might wonder why the author had done such a clunky disservice to his own fantasy novel by attempting to sway his audience's political leanings is such an obvious way.
Ayn Rand (Objectivism) seems to be his inspiration and Jordan Peterson (self-absorption) his intellectual ally.
If either of these writters appeal so to might this series.