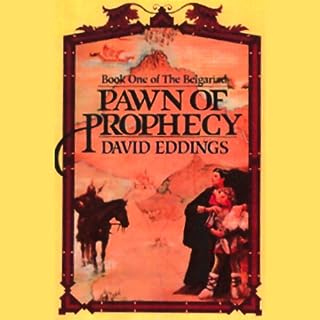 Long ago, so the Storyteller claimed, the evil god Torak sought dominion and drove men and Gods to war. But Belgrath the Sorcerer led men to reclaim the Orb that protected the West. So long as it lay at Riva, the prophecy went, men would be safe. That was only a story, and Garion did not believe in magic dooms, even though the man without a shadow had haunted him for years.

I read the stories when I was younger and loved them. The stories have been a joy to revisit but the performance let's them down a little.
The voices and characters are enjoyable but sometimes the accents change for the same character which is confusing.
Additionally the mispronunciation of some words e.g. Quay is rather irritating. However, I'll still be listening to all of the books since I love the stories so much!