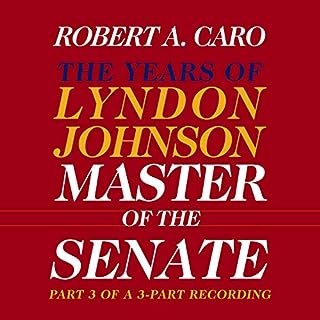 Master of the Senate carries Lyndon Johnson's story through one of its most remarkable periods: his 12 years, from 1949 to 1960, in the United States Senate. Once the most august and revered body in politics, by the time Johnson arrived the Senate had become a parody of itself and an obstacle that for decades had blocked desperately needed liberal legislation. Caro shows how Johnson's brilliance, charm, and ruthlessness enabled him to become the youngest and most powerful Majority Leader in history.

Unlike previous books in this series the “this book is continued on the other side of this tape” makers remain in. A minor distraction but should be edited out 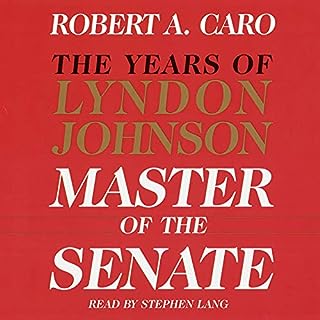 Master of the Senate carries Lyndon Johnson's story through one of its most remarkable periods: his 12 years in the U.S. Senate. At the heart of the book is its unprecedented revelation of how legislative power works in America, how the Senate works, and how Johnson, in his ascent to the presidency, mastered the Senate as no political leader before him had ever done. "There is something uniquely mesmerizing about the wily, combative Lyndon Johnson as portrayed by Caro," says Publishers Weekly.

I made a mistake downloading this instead of the versions narrated by Grover Gardner. So ended up wasting credits on this and then having to download the correct versions.