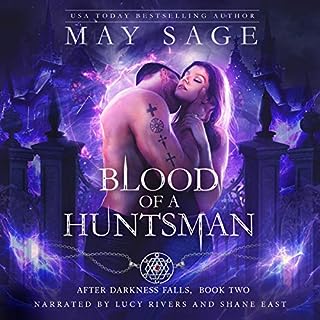 The vampires have always feared the first of their kind and his descendants. Now all immortals know there’s a new Eirikrson threatening their way of life. And they don’t intend to let her. Catherine Stormhale has spent decades trying to crawl out of her family’s shadow. Now they’re calling her back home, to serve their clan against her new friends, and she has a choice to make. Bash used to know who he was. A protector. A provider. A huntsman. After being bitten by a feral vampire and turned into a blood-craving thing, he’s lost everything. Family, purpose, honor.

Better than the first

I liked this better than the first, as the main characters had more page time together unlike in the first story. The story had a natural progression of the development of the romance. But little things were dropped in that seemed to go somewhere but never did eg : Cat started having issues with blood but was never explained why.
Good quick story further developing the Institute. 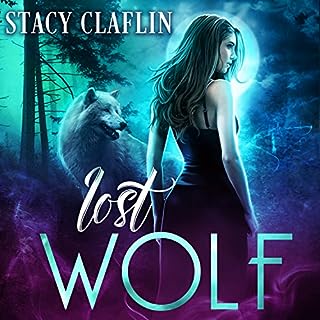 Victoria can't wait to start college, but there's a hitch - she can't remember anything before arriving on campus. Her memories finally spark when she sees her ruggedly handsome math professor, but she senses something terrible happened. The shock on his face affirms her fears. Toby is an alpha wolf who never thought he'd see his true love again - not after she died in his arms. Nothing could have prepared him for her walking into his class. But to his dismay, not only has she forgotten the past, she doesn't even know who she is.

This book has been targeted all wrong. It is more aimed at YA & if it had been would have saved myself listening to a bad book. Heroine is 18yrs old in in first year of collage, yet at the start she's asked out to go to a club & everyone including the boy taking her act like they're going to prom... I should have realised then how bad this book was going to be. The heroine drives a Jag & is taking to a club called the Jag & 'suddenly' she's surrounded by jaguars... this just seemed to be over reaching way too soon. The dialogue between the characters seems so juvenile at times & her best friend just doesn't know when to stop. I have never groaned or rolled my eyes so much listening to a book. The male narrator doesn't show up until chapter 6. Victoria keeps herself so distant from Toby for so long, but then in the blink of an eye can't stay away. I know they're meant to be together but wish it had happened more organically from the beginning. There was one scene where they were sitting together at lunch, there needed to be more scenes like this of them together. The narrators did the best with what they were giving, even if both towards the end sometimes didn't use the different accents that had already been set in place. UGH !!! 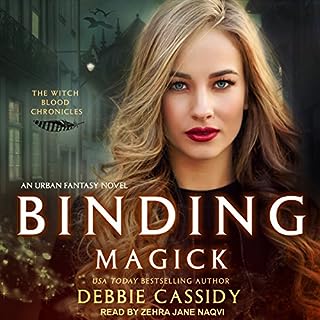 For Carmella Hunter, a witch blood with practically no magick, being surrounded by powerful friends has taken its toll. For once it would be nice to be the one doing the saving. Stuck in a dead-end job in Piccadilly's favorite bakery, Carmella spends her days making cinnamon rolls and her evenings feeding the homeless, all the while dreaming of making a difference. One huge pastry order for the Covens annual meet and an attack of flu germs leaves Carmella delirious with a fever - too delirious to avoid a fateful bargain with a djinn named Paimon.

Glad I stuck with it.

It took me 2 goes to actually listen to this. The narrators voice was just to young girl for me if put me off for a while. But once I gave it a chance the story is what kept me listening & can't wait to get the next in the series. 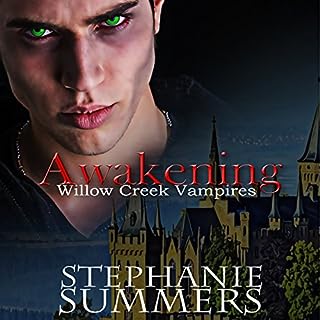 The town of Willow Creek is seemingly free after Remy's sacrifice set off a life-altering chain of events that resulted in the demise of most of the world's vampire population. Sabine flees to her home afterward, except her family has disappeared and a "For Sale" sign is planted in her front yard. Just when she thinks she's lost it all, she's summoned back to Willow Creek Manor.

Not as suspenseful as it could have been, but a great end to the love story of Remy & Sabine. Most threads were finalised in a satisfying way. 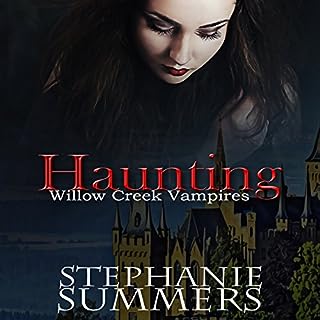 Sabine Crowley is adjusting well to her new life at Willow Creek Manor with Remy by her side. That is, until she finds out some devastating news from Bastian. Has Remy been lying all along about his feelings for her? Had she been a fool to believe he really could love her? Remy has been accused of trying to leave Sabine and his responsibilities to Bastian behind.

Remy wants to know what Bastian is hiding & goes to great lengths to find out, leaving both himself & Sabine in danger. Sabines former life is drifting away further & further leaving her completely reliant on Remy & witchy new friends. Like the first book, the story moves along quickly & ends on a cliff hanger.

A few times Joel's voice seemed completely different, like he may have gone into to record some parts. It's only for 1 to 2 sentences. 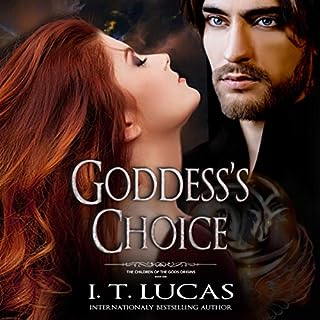 Promised to the power-hungry god Mortdh, the young Annani is determined to find a way out of the prearranged political union that would one day put Mortdh on the throne. Even though Khiann is the son of a merchant and not a member of the leading circle, the handsome young god is a much more appealing choice. Now all she has to do is convince him that she is worth chancing an all-out civil war over succession and, possibly, his very life.

Did not enjoy this story, in all honesty NOTHING happened... There was no action, no build up, just the 2 main characters sneaking around to be with each other. When there were obstacles they were over come with too much ease. It was so boring and could not wait till it ended and don't really want to her about a 17 year old losing her virginity.
Annani has been promised to another since her birth. The one she's been promised to is HER FIRST COUSIN. I know this about GODS & the author never lets you forget that, but it seemed like a bit of an ick factor that we're just suppose to accept as an everyday thing... 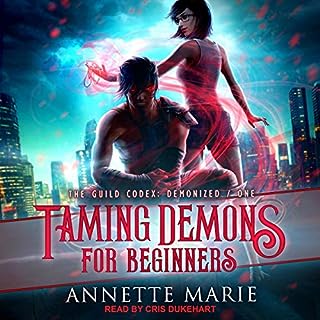 When I arrived at my uncle's house, I expected my relatives to be like me - outcast sorcerers who don't practice magic. I was right about the sorcery, but wrong about everything else. My uncle chose a far deadlier power. He calls creatures of darkness into our world, binds them into service contracts, and sells them to the highest bidder. And I'm supposed to act like I don't know how illegal and dangerous it is. All I had to do was keep my nose out of it. Pretend I didn't find the summoning circle in the basement. But I did, and now it's too late.

Great start to a new series

Great spin off from the Spellbound series. Dangerous situation with so many ways it could go, can't wait for book two. 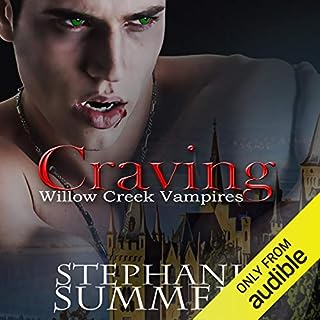 Welcome to Willow Creek. People are happy, crime is practically nonexistent, and life is good...unless you're Sabine Crowley. Sabine has been chosen to be the next blood bag for the vampire lord who has protected the town from otherworldly creatures for 200 years. Remy has been summoned by his maker, Bastian, to take his place beside his maker in the hierarchy of vampires inhabiting Willow Creek. He's repulsed by the whole situation. Sabine is terrified of him and her strange attraction to him.

I enjoyed this more than I thought I would. Quick fun listen, moves along quickly & not so much thought needed. 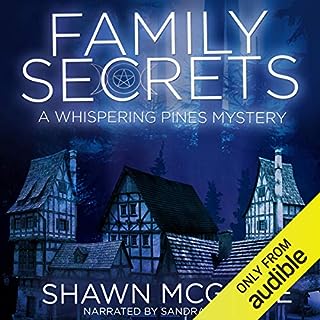 Sixteen years after a family feud drove her from the cozy Northwoods village of Whispering Pines, Wisconsin, former detective Jayne O'Shea returns to prepare her grandparents' lake house for sale. Once there, not only does she find that the house has been trashed, her dog discovers a dead body in the backyard.

A really great introduction to Whispering Pines & its many secrets. I loved the practical approach to witchcraft & wicca. If your into paranormal witches, this book isn't that. The only thing I didn't like was the murder's motivation just didn't seem plausible enough. Definitely set up for more mysteries to be uncovered. 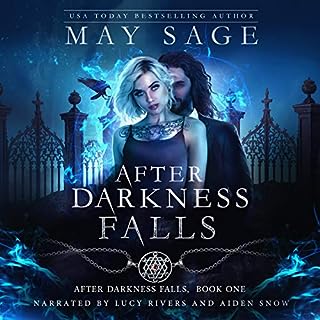 Chloe used to study hard and do everything right to pave a bright future, but children sometimes have to pay for their parents’ sins, and Chloe’s tab is pretty steep. At 26, when a series of attacks forces her to seek refuge in the notorious Institute of Paranormal Studies, Chloe sees it as a second chance to achieve her goals. She believes she has nothing to lose. She couldn’t be more mistaken.

Great start to the series

Overall really enjoyed this story, binged it in a day. The only negatives is the male narrator didn't show up until chapter 12 & then not again until chapter 33. It seemed weird to have Levi's perception so brief both in limited chapters & chapter lengths. Lucy Raven did a great job & tried to make the females sound different but at times forgot & used the same voice for a secondary character that made you think it was Chloe. As this is a stand alone in the series I wish there had been more scenes of Chloe & Levi together as loved their chemistry, but sad knowing may not come back to these characters in future books.