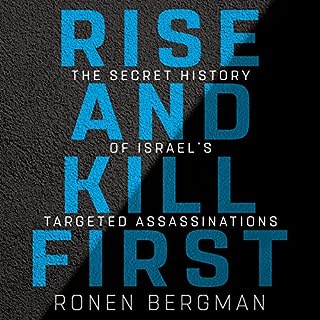 In this pause-resisting, eye-opening audiobook, journalist and military analyst Ronen Bergman - praised by David Remnick as 'arguably [Israel's] best investigative reporter' - offers a riveting inside account of the targeted killing programs: their successes, their failures, and the moral and political price exacted on the men and women who approved and carried out the missions.

I thought I had a reasonable knowledge of Israel and it’s basic history however Mr Bergman has shown me that I had no idea.

This book provides a surprisingly unbiased history and certainly doesn’t shy away from the negative results delivered.

Despite the 25 hr play time, this book flew past.