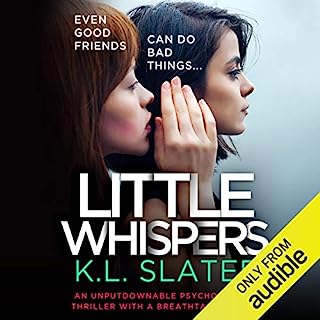 Janey Markham is thrilled to be moving with her family to Buckingham Crescent, the smartest address in a desirable suburban town. Worried she’ll be excluded by the glossy local mothers, Janey is thrilled when she meets Tanya, the kind of woman she has always looked up to. Tanya takes Janey under her wing and her teenage daughter, Angel, is amazing with Janey’s little boy. As Janey and Tanya grow closer, Janey feels she can finally leave her troubled past behind.

This story was slow to start, but gradually started to present more and more unanswered questions to the point couldn't put it down (stop listening) I usually only listen when driving finding it boring to just sit and listen. Not this time. A real thriller. 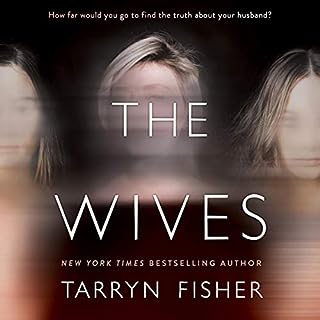 Thursday’s husband, Seth, has two other wives. She’s never met them, and she doesn’t know anything about them. She agreed to this unusual arrangement because she’s so crazy about him. But one day, she finds something. Something that tells a very different - and horrifying - story about the man she married. What follows is one of the most twisted, shocking thrillers you’ll ever hear. You’ll have to listen to find out why.

I did enjoy this book but found the ending to be..mehhh. It might just do it for some but for me left me feeling silly for supporting her all the way. There didnt seem to be any reason explored for why some of these characters acted the way they did. Maybe its me that just missed it, but there you have it The narration was excellent however. 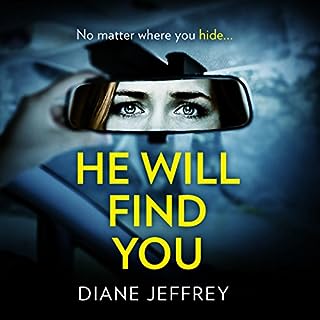 Kaitlyn Best is stuck in a rut. So when she discovers she's pregnant after a one-night stand with Alex, her school crush, she throws caution to the wind and accepts his offer to make a new life together in the depths of the Lake District, far from her home...and her demons. But Alex is not what he seems. And when Kaitlyn's world begins to crumble before her eyes, she realises she barely knows the man she has agreed to spend the rest of her life with.

The idiotic main character had me gritting my teeth and wanting to push HER off a cliff myself. Lots of inconsistencies still in the script which are annoying to say the least. Narrator was excellent however 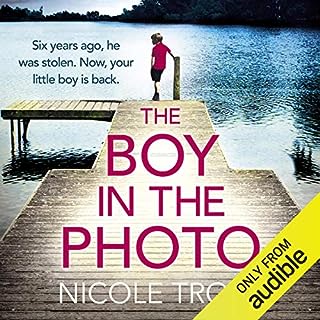 Megan waits at the school gates for her six-year-old son, Daniel. As the playground empties, panic bubbles inside her. Daniel is nowhere to be found. According to his teacher, Daniel’s father picked up his son. Except he and Megan are no longer together. After years of being controlled by her cruel husband, Megan finally found the courage to divorce him. Hands trembling, she dials his number, but the line is dead. Six years later, Megan gets the call she has dreamt about for years. Daniel has walked into a police station in a remote town just a few miles away....

I enjoyed this book and as someone who has worked in child protective services for many years, am familiar with the issues raised in this harrowing tale, of domestic violence and controlling partners, of mental health illness and of grooming a child's mindset to twist reality to reflect that of the abuser. But the mother drove me nuts! I wanted to slap her so many times for her naivety and ignorance...bur then i had to remind myself that people otten are naive and ignorant in these situations. Not too many surprises in the plot development. You didnt need to be a psychic to know what was coming next, but still a good "read" to a predictable but satisfying conclusion 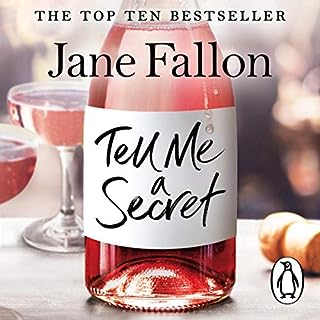 Holly is feeling on top of the world - celebrating a new promotion and dying to pop the champagne with her best friend Roz. But is Holly just imagining things, or is Roz - who supported her every step of the way - not as happy for her as she should be? Something about Roz's behaviour doesn't add up. And soon Holly has the sneaking suspicion that there's a target on her back. Has someone been playing dirty in a war Holly didn't know she was fighting? And is Roz more tangled up in this than she'll admit? Only one woman can be left standing - but will the best woman win?

I have read several Jane Fallon books now and have enjoyed them in varying degrees,. This one was OK, entertaining and well read (if the narrator a bit too fast) with good reflection of the book's character's tones. But it was also predictable. Not too many surprises, .just confirmation of what you picked up early on. Maybe i didnt enjoy it as much because ive had the unfortunate experience of working with too many office bitches over the years. At least this was a divergence from what appears to be a commom theme in Fallon's books, that being of revenge. 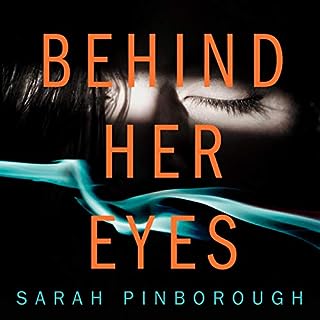 Exploring the dichotomy between one's inner and outer self is central to Behind Her Eyes. When a vulnerable woman is drawn into the lives of an enigmatic couple, she finds it hard to differentiate between reality and what truly lies beneath a seemingly perfect exterior.

Behind Her Eyes is simply the most intriguing book I have ever read for its stunning ending that unravels everything you had assumed. Awesome read and kept me the edge of my (car!) seat in every chapter. 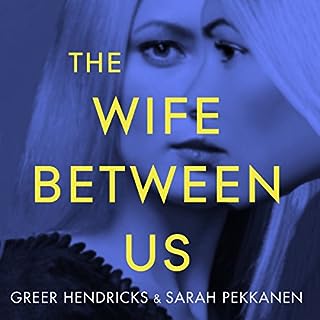 When you listen to this audiobook, you will make many assumptions. It's about a jealous wife obsessed with her replacement. It's about a younger woman set to marry the man she loves. The first wife seems like a disaster; her replacement is the perfect woman. You will assume you know the motives, the history, the anatomy of the relationships. You will be wrong.

This is the 2nd time ive either read or listened to the audio. You know that feeling you get halfway through when you know you know what is going to happen? But it must have been a long time ago because i was transfixed all over again and couldn't put it down. 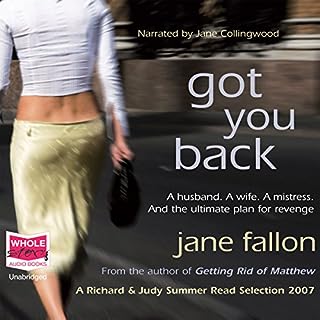 James never intended to lead a double life; with a wife in London and a mistress in the country, it's exhausting. But that's all about to change. Stephanie, his wife, isn't really snooping when she finds a text message from a strange woman on her husband's mobile. But now she's found it, how can she ignore it? It's time to track the woman down and find out what's going on. Katie has no reason to believe her boyfriend, James, is cheating on her until someone claiming to be his wife gets in touch.

An interesting story of revenge

Narration wonderful with just the right emphasis when needed. The story was engrossing and a clever look at the intricacies of betrayal of a marriage. Descriptive and well developed characters 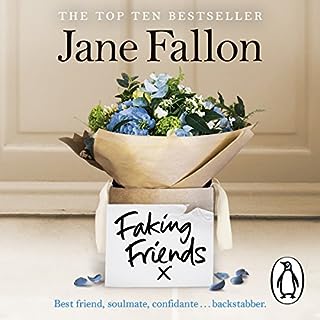 Penguin presents the audiobook edition of Faking Friends by Jane Fallon, read by Sally Scott and Kristin Atherton. Best friend. Soulmate. Confidante. Backstabber. Amy thought she knew who Melissa was - then again, Amy also thought she was on the verge of the wedding of her dreams to her long-distance fiancé. When her career begins to unravel, she pays a surprise trip home to London. Her boyfriend Jack is out, but another woman has been making herself at home....

Really enjoyed this story which i listened to in one day as I did housework, cooked and sat curled up on the couch in front of the fire on a rainy afternoon. The toxic "friendship" between Amy & Mel is something I think most women can relate to. Many of us have had a Mel in our lives that we slowly learn is not a friend at all. Only one small criticism.. when Cat knocks on Jacks door (to check no one is home prior to her and Amy letting themselves in to snoop about) saying if either Jack or MEL answer she would just say she was in the area and popping in to say hello. This does not make sense as Mel is not supposed to be in Jacks house so why would Cat potentially say to Mel if she came to the door that she was popping in to say hello? Jack yes, Mel, no. Apart from that minor point the book is a great read. 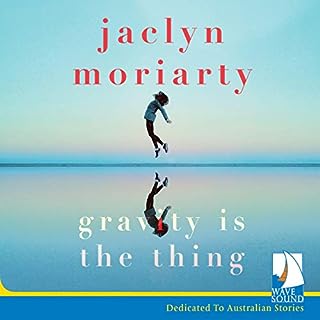 Abigail Sorensen has spent her life trying to unwrap the events of 1990. It was the year she started receiving random chapters from a self-help book called The Guidebook in the post. It was also the year Robert, her brother, disappeared on the eve of her 16th birthday. She believes the absurdity of The Guidebook and the mystery of her brother's disappearance must be connected....

I persevered until 3/4 Of the way thru this book which got more and more..can't think of a word to give it justice...banal, boring, mind numbing. I usually enjoy Moriaty but definitely NOT this time. Waste of time and a ridiculous story theme. What were you thinking Jaclyn???