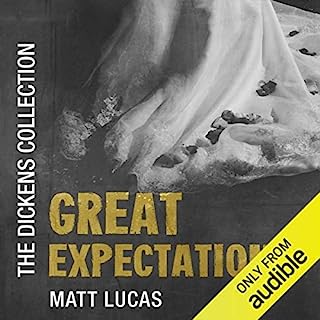 In this Audible Exclusive performance by Matt Lucas of Great Expectations, Charles Dickens demonstrates that conscience, loyalty and empathy are virtues far more valuable than intellect, wealth and social standing. First published in Dickens’ own periodical, All the Year Round, the novel was divided into nine monthly instalments, from December 1860 to August 1861. Unsurprisingly, it was an instant success and managed to sell over 100,000 copies per week. Though written at a challenging time in Dickens’ life, when the impending breakdown of his marriage loomed over him, Great Expectations proves to be one of his most optimistic, comical and romantic novels.

Hi. I would like to refund this book because I have purchased the same title read by Eddy Izzard. I have tried to go to Audible website but after I have signed in something weird happened. After I put the sign details in, I was shown a web page that wants me to become a member and do a free trail. No mention of say I put a wrong detail, it just showed me the page for a non member and no other menu to even try to navigate. Now I am in Amazon website, I cannot find the refund option. I am enjoying the Eddy Izzard version and I would really like this version to be returned. Please fix this issue.