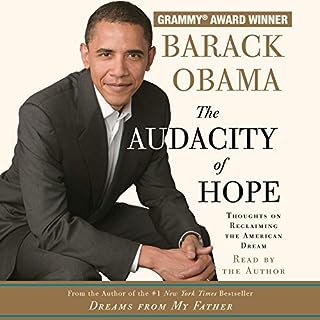 In July 2004, Barack Obama electrified the Democratic National Convention with an address that spoke to Americans across the political spectrum. Now, in The Audacity of Hope, Senator Obama calls for a different brand of politics: a politics for those weary of bitter partisanship and alienated by the "endless clash of armies" we see in Congress and on the campaign trail; a politics rooted in the faith, inclusiveness, and nobility of spirit at the heart of "our improbable experiment in democracy".

a good interpretation on politics and compromises

easy to listen, some good insights and a very kind and touchy last chapter.