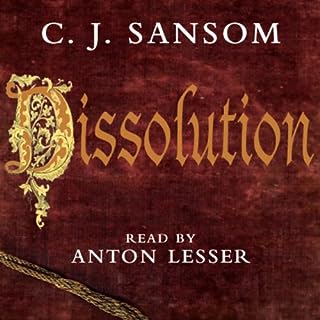 Henry VIII has proclaimed himself Supreme Head of the Church, and the country is waking up to savage new laws. Under the order of Thomas Cromwell, a team of commissioners is sent to investigate the monasteries. At the monastery of Scarnsea, events have spiralled out of control. Cromwell's commissioner, Robin Singleton, has been found dead. And Matthew Shardlake, lawyer and long-time supporter of reform, has been sent by Cromwell into an atmosphere of treachery and death to investigate.

Excellent narration of an intriguing story!

This was the second time I'd read 'Dissolution' but the first time I'd listened to it as an audio book. Anton Lesser is a fabulous narrator and brings to his reading all the skills of his thespian experience and talents. Having recently finished 'The Mirror and the Light', it was interesting to read Sansom's much harsher and less humane characterisation of Cromwell. It is a shame that it was abridged as it lacked all the details of the original novel. Despite this, I thoroughly enjoyed it! Now to re-read / listen to the next 5 in the series before I read 'Tombland' for the first time. If only Anton Lesser were narrating this one too! 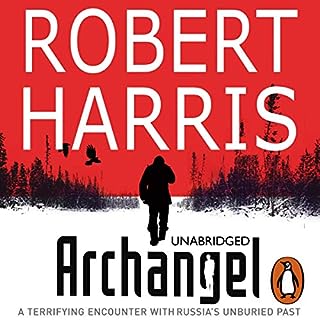 When historian Fluke Kelso learns of the existence of a secret notebook belonging to Josef Stalin he is determined to track it down, whatever the consequences. From the violent political intrigue and decadence of modern Moscow he heads north - to the vast forests surrounding the White Sea port of Archangel, and a terrifying encounter with Russia's unburied past.

Fascinating and riveting! Harris's vivid almost palpable depictions of characters and settings superbly dramatised by one of the best narrators around, Michael Kitchen! Despite an unauthentic American accent, he succeeds in developing each character, and offering to the listener an intimate portrayal of Harris's panoply of personae; his modulation of timbre and pacing creating a sense of atmosphere that is almost visceral.