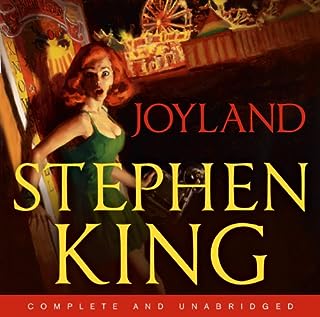 Joyland is a whodunit noir crime novel and a haunting ghost story set in the world of an amusement park. It tells the story of the summer in which college student Devin Jones comes to work as a 'carny' in small-town North Carolina and has to confront the legacy of a vicious murder, the fate of a dying child, and the way both will change his life forever. It is also a wonderful coming-of-age novel about friendship, loss, and your first heartbreak.

What a beautiful journey!

Set in North Carolina 1973, Joyland is a story of a young adult, Devon Jones. After leaving town for a summer job at an amusement park, Devin Jones finds himself learning new things on his new journey. On his first day, Dev meets with Rozzie, the fortune teller, who prognositicates his future and warns him for what lies ahead. With the rumors of the amusement park being haunted going around, Dev launches his own private investigation into the murder of Linda gray, a customer who got killed in the amusement park years ago. On a day off, Dev and his buddies, Tom and Erin, decide to visit the haunted house at the amusement park, themselves. While Dev and Erin find nothing out of the ordinary, Tom claims to have seen someone in the dark. As the summer ends, Dev decides to take a year off from college and work at Joyland instead. Tom and Erin go back to college, leaving Dev alone. Dev, instead, meets new people like Mike and Annie. Dev starts to realise that Rozzie wasn't wrong because he senses something in Mike. Meanwhile, suffering from a terminal illness, Mike urges to visit Joyland once before he dies. His visit to the Joyland unravels a lot of mysteries for Devin. Joyland is a coming of age story of Devin Jones who suffers from a heartbreak and realises that there are bigger things in the world than losing a relationship. It is a very engaging read, written in an informal manner. I loved the intrigue and the suspense. It really hooked me in and kept me engaged. My first Stephen King novel didn't disappoint me, after all. Although, if you are looking for something gruesome and extremely supernatural, you might not be satisfied. But it is a good crime fiction and worth a shot.