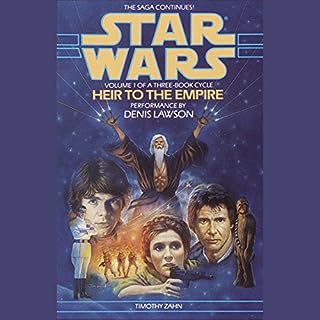 Heir to the Empire begins five years after Return of the Jedi. The Rebel Alliance has destroyed the Death Star, defeated Darth Vader and the Emperor, and driven the remnants of the old Imperial Starfleet back into a quarter of the territory it once controlled. But thousands of light-years away, the last of the Emperor's warlords have taken command of the remains of the Imperial fleet - and have made two vital discoveries that could destroy the fragile new Republic.

What would have made Star Wars: The Thrawn Trilogy, Book 1: Heir to the Empire better?

Who might you have cast as narrator instead of Denis Lawson?

Marc Thompson, would have done better justice to the masterpiece that Timothy Zhan had written

What character would you cut from Star Wars: The Thrawn Trilogy, Book 1: Heir to the Empire?

This recording must be redone with the full book being read as key elements are either lost or completely ignored in favour of the time constraint.